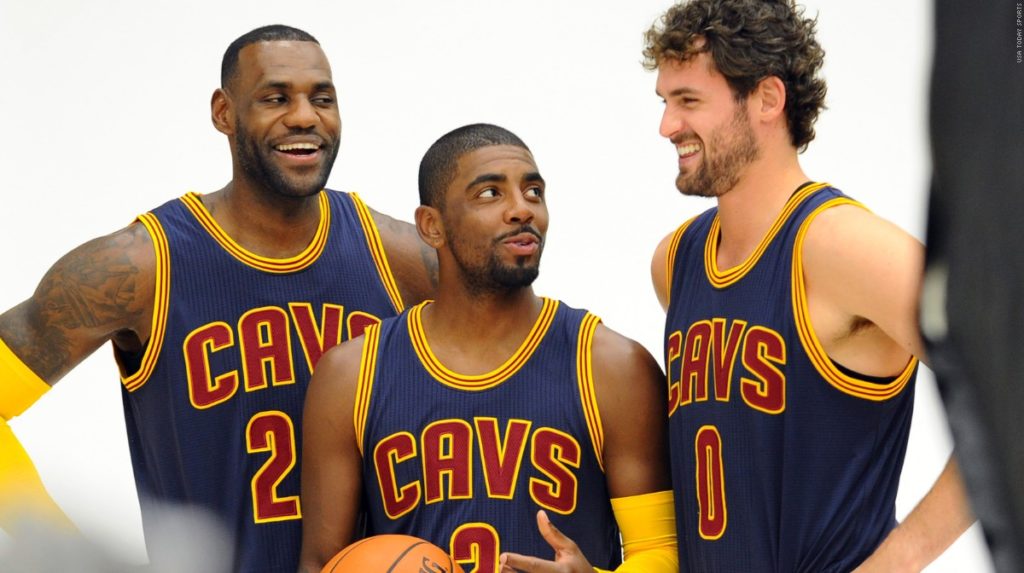 In this ‘Jurassic World’ these dinosaurs are anything but prehistoric. They really are the north and adding some Canadians to their core of Kyle Lowry and DeMar DeRozan precisely points to this, compass or map. B.B. cover star Corey Joseph bolsters the bench, whilst former number one lottery pick or bust Anthony Bennett is the wildest of cards. There’s one Canadian we don’t want to see on the floor however and that’s top rapper and owner Drake. The one day Kentucky alumni is meek, not Steph Curry with the shot. Can we let this go? So long as Aubrey Graham does not let it fly in Air Canada!

D-Will has made his way. Now, Deron Williams is calling Dallas home once again it’s all on J.J., whether All-Star Joe Johnson or Sixth Man Jarrett Jack out the box. The B.K. is going to need more J’s to compete, even in a rotting apple before its no sleep in Brooklyn.

Are the Knicks really mellowing on Carmelo? Sure Phil Jackson’s triangle plan may be a Bermuda right now and Derek Fisher could be clutching at a job, but that’s no reason to blame the one guy from Syracuse who gave it all to these orangemen. They owe him. Big man and pick Porzingis could be a start. At first they hated but this top ten chart climber could be the next Dirk…or irk. The Garden could still be Eden again, but right now there’s potholes in the Madison Square lawn.

The Lakers passed on Okafor?! No worries, the Sixers will give him a cap, even if he disregards their sweet new jerseys. This teams new look is an instant classic and Jahil forms a formidable frontline alongside Nerlens Noel. Now if only Joel Embiid could stay healthy…then this frontcourt of centres could scale Brotherly Love sports to walk even taller than those Rocky steps.

The championship days of Kevin Garnett, Ray Allen and Paul Pierce officially ended last year when Rajon Rondo passed on the shamrock. But still this is THE storied NBA franchise that gave you Bill Russell and Larry Bird. Plus Isaiah Thomas is more than just a guy that’s going to remind you of the good ole, golden era 80’s days. Bad Boy or not. Now what they gonna do?

The Cavs…or should we say the King were one stone step away from the throne in this game last year. If it wasn’t for the likes of Steph Curry, Andre Igudola and Steve Kerr, LeBron James would have won it all himself. With Kyrie and Kevin in good health and under contract the crown may just fit, Tristan extension or not. And you thought the new Big Game James wasn’t worthy? This God can turn wine to champagne.

Losing Derrick Rose to injury is almost a thorn in the side given. Losing the services of Most Improved Jimmy Butler was never an issue. Matching the contract was easy, making these two who are both about to be on point a match made in heaven is a hell of a task…even for Thibs. New coach Fred Hoidberg knows Chicago and the Bulls, even those who lock horns. On paper this team is as deep as they come from defensive dominator Joakim Noah to bench veteran Mike Dunleavy Jnr. Still if these stampeding Chi’s want to stay out of the red they need to give the charge to their Spanish Bulls of rejuvenated, EuroBasket MVP Pau Gasol and last years runner up rookie and veteran ready Nikola Mirotic. Then to everyone else they’ll be matador.

At least the Pacers will look good this year, honoring the Indiana Hoosiers with those red classic Hickory jerseys for some classic games with gold shorts shinier than George Hill’s dome. After Lance, losing the interior presence of Roy Hibbert and David West could leave this team watching the paint dry (respect to the late, great Oscar nominated Dennis Hopper) especially putting returning from almost career crippling injury Paul George stretched out, playing the four. This uses to be the Indy 5.00. Now it’s the Paul-George-Hill show. Time to run the picket fence!

Greg Monroe got Bucks in Milwaukee, but Motor City still has something big under the hood with Andre Drummond. These Pistons are still driven with him and Brandon Jennings. Even if it looks like the motor industry is sputtering in Detroit, like Ford you can always rely on a star-studded vehicle. Motown may have died with Marvin, but with some Motor Oil this town will thrive and throttle through once more. All you have to do is turn it over and give it a good kick…and then it’ll all start up again.

The cream re-design is beautiful. Just check the Stag, this team is more mature. Get the point? Well perhaps the alphabet can spell it out for you? There’s O.J, the M.C.W. and now Greg Monroe…the most underrated free agent of this big class. Oh, and Jabari Parker is back and gets to be a rookie once again. This isn’t just his year. Best since Oscar and Kareem? These big Bucks where always meant to stay green. If money talks, then Milwaukee sings. Just ask Jadakiss.

If it ain’t broke don’t fix it…even with a magicians wand. No hocus pocus, Harry Potter needed here, these Wizards have already pulled a rabbit out the hat. Paul Pierce may be gone but truthfully speaking this teams depth lies in Poland, with the great Gortat possibly the biggest and most underrated big-men in this league of post shadows. No wonder President Obama cares about this capital Washington D.C. side. But forget Kevin Spacey. This is all about the House Of Guards and Lincoln and M.L.K towns new monuments, Beal Street and the great Wall. On your left!

The King era is dead. That’s last years news. Long live the Heat! Besides Flash never left and original superhero Dwyane Wade is back with a team that’s just added new franchise face Goran Dragic and former top, trading card All-Star Amar’e Stoudemire to last years free agent grab Luol Deng and the upside of Hassan Whiteside. Oh and lets not forget the valiant return of the underrated power of Bosh, defying death and bringing a new lease of life to a team that lost its crown. Now they have one Sinister Six for all the leagues heroes to marvel at. Is the Heat back on? Please…this team never left the kitchen! You can keep the sink.

If it ain’t broke don’t fix it. Part two…this time in neon letters. These Hawk eyes still glare like those gaudy new jerseys. Horford, Millsap, Korver and Teague…they’re all All-Stars literally. Now after coming so close its time for the Hawks to keep their talons in this tight competition if they finally want to be American Eagle. Welcome back to Atlanta, the Pac-Man returns like the Dominique dominant 80’s, but can the ATL eat its way to the end of the maze? Or is it all just pixels in this digital age?

The Lance Stephenson project didn’t really work out did it? Time to roll out the Tank. Wisconsin’s Frank Kaminsky was a great draft, adding more artillery. But this team needs to be more than Kemba, Kidd-Gilchrist or the Michael of their big-time owner Jordan if these redesigned and rejuvenated Charlotte Hornets want to make a name for themselves beyond the nest of the honeycomb again.

The blue chips are down for Shaq’s former team. Even Nick Nolte would have a hard time in shouting this team into shape. Its been a roller-coaster couple of seasons in Mickey’s town but Victor Oladipo and Elfrid Payton are the future of this small ball revolution league. Give them more tricks via trade and they could bring the kingdom back to the Magic. Now you see them…now it’s time for the second act.