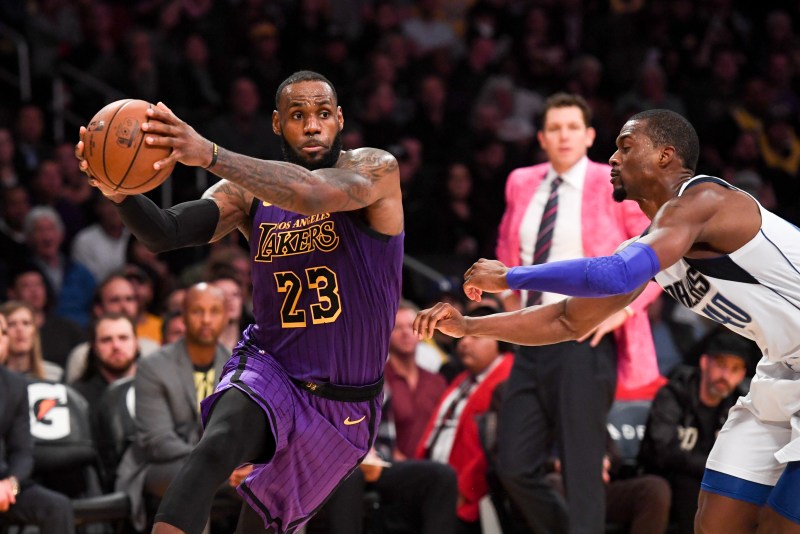 An Outlaw King Is Too Much For A Texan Maverick

Reflected in the purple neon glass of the STAPLES Center north entrance is a black and white image of LeBron James and his number 23 jersey from behind. Looking up to all those retired numbers and raised banners with the words next to the Nike swoosh, “It’s only a crazy dream until you do it”!

“Hey, what’s that accent. Where you from”?

“I’m from England. I came all this way to see the King”.

“I’ve been a Lakers fan for more than 20 years when I was 11. Since the days of Eddie Jones and Van Exel”.

“Me I was a little before. I’ve been a fan since Sedale Threatt”.

“He’s the truth. You know his son is an actor”?

“Yeah! Sedale Threatt Jnr. He was in the new ‘Roots’”!

That’s kind of how the conversations go for this writer concluding Basketball Buzz’s road trip of the United States, everytime he suits up in Lakers gear in Los Angeles. And with a dozen conversations like this one for a guy who never gets this back home (apart from his boy. Coincidentally the only other basketball fan in the country, who also loves the Lakers and is from the same, small seaside town), this is hoops heaven in the City of Angels. The only thing better, seeing a Basketball God in his Adonis like prime do his thing, back-to-back. Two nights in a row for the once in a lifetime only chance I may get to see the King play live in the flesh before his banner moments join the other jerseys in the STAPLE of the ceiling he soars to on every play. Like the two Kobe’s number 23 aims to join up there, after eight and before 24. New additions like the Elgin and Shaq statues outside of courtside.

And boy did I see him play.

Especially after I didn’t want to tempt fate and see him injured and miss him play like Point God, Rajon Rondo. But as my friendly Uber driver, who introduced me to an R&B artist he’s managing who explicitly makes The Weeknd look like the ‘Once, Twice, Three Times A Lady’ of Lionel Richie says, “that guys iron man”! Dreams of riding with the King like B.B. and Clapton do come true like the goal checked of singing Ray Charles’ ‘Hit The Road Jack’ (“and don’t you come back no more, no more, no more, no more”) when an opposing player gets ejected as per STAPLES tradition.

Damn Denzel! We would have loved to have been an ‘Inside Man’ to the ‘Genius Talk’ you gave the Lakers (like Kendrick Lamar earlier this season, looking hilariously short next to all those ballers with vertical in their DNA) this week like ‘Remember The Titans’. We all know the ‘Pelham 1 2 3’ great equaliser line of never seeing a U-Haul behind a hearse, but we’d love to take this with us. Because Washington’s words of wisdom have helped the Lakers reach new heights before the calender end of December. Especially LeBron who is playing like a man on fire right now.

Better things could have been done in Denver this week for the Lakers chances there to not be dead in the Mile-High air. But last night back home a 38 point stand was made after the Lake Show put a stop to squandering a blowout against the Indiana Pacers running with those Hickory Hoosier picket-fence favourites. After gutting that one out they face a gruelling week in their home castle. But tonight after a slow start that looked like a yesterday’s tomorrow sophomore slump, the Lakers electrified the fast break like those strobe lights of the pregame introductions.

With Dirk Nowitzki’s attired up in joining a pretty in luminous pink Luke Walton honouring the strength of Craig Sager courtside, this West Coast powerhouse clash was dubbed a Luka Vs LeBron big fight before the big one at STAPLES this weekend. But the future of this league and Rookie of the Year favourite couldn’t associate with the veteran, greatest of right now and all time MVP sure-thing. Unleashing his sky-hook unstoppable like, bump and grind, Muhammed Ali moves of bobbing and weaving as he floats and dribble drives like a butterfly and stings and smash slams like a bee. After taking seemingly two steps as he strides down court from coast to coast, like he did The Land to La La Land. ‘Bron knows how to bounce and bang and knock his opponent for six. Or should we say 28? As after being blocked by a young and ready Donic twice at a time, James went full King and showed this young prince where the real throne lies. Coming alive in the night time of this game, he made up for no dunks in the last contest (hey it’s something this writer wanted to witness at least once) by going above the rim like Tupac as ‘How Do You Want It’ and his Beats By Dre ‘California Love’ commercial played over the PA. And if that sounded big, then when the best to Drake, Lil’ Wayne, Eminem and Kanye’s ‘Forever’ track off his ‘More Than A Game’ Irish movie soundtrack came on, LeBron came even more alive. Duking and dunking, spinning and scoring and making moves of the year and history highlight. Before dropping one final hammer from way deep into his downtown toolbox after a night of wielding axe wild dunks in front of ‘The Shining’s’ own Jack Nicholson. Heeeeere’s Johnny! And Bronny. Back again.

‘Daddy’s Home’ too. A mean-mugging, chin-stroking, playful ‘Anchorman’, Will Ferrell (I know Chilli Peppers attend these games but that ain’t Chad), Seattle Sonics thrift shop, throwback fanboy, Macklemore. A knockout Evander Holyfield with all of his ears and Lionel Richie (Hello!) we’re all in jumbotron attendance all night long. All legends all to watch another one do his thing. At one moment when LeBron actually hit from the free-throw line, either end courtside you had one man who made an iconic Joker and another Commodore who helped make Motown zoom watch a new kind of 23. And if you drew that big-three up in an on court play it would almost look like a triangle.

Must Read:
Alex Caruso, You Are My Hero

But the Lakers escaped a Bermuda from a terrifically talented Texan team featuring Jordan’s and juniors. One of the best stars of this league Harrison Barnes, who following a shoot-around morning was strolling round outside STAPLES with iced knees was ice cold in a good way looking to put this game in the freezer from downtown, let alone the refrigerator. But Brandon Ingram had an incredible first quarter for the Lakers keeping the teams money talking, before carrying on that tenacity throughout with 19. Alongside the 10, 4 and 5 of fellow young gun Lonzo Ball, who is shooting and handling the pill like that ankle was strapped not sprained. His snatch, grab and dash D-game, like his heart, or the ink on his arm art is growing and expanding like that very muscle hustle. He and a big McGee may have ended up fouling out. Say what you will about this ‘Stranger Things’ dubbed “Meme Team”, behind all that show, flash and glitz we haven’t seen this much, no expletives given grit since the 90’s Knicks. It’s a comprehensive roster of future and vets, style and sustenance. And everyone from B.I. to an ejected J.J. was technically in trouble as KCP went to the line more times than LeBron misses from it. And after a big inside job (12 scores and a season high 13 boards) and pivotal play with Chandler flexing and bruising before the Tyson fight this weekend. Not to mention Kyle Kuzma going for 15, 12 and 6 once he took off that headband. And Hart beating from clutch three to his signature, arm strong, bicep touching celebration, the Lakers looked good for the win and not looking back once they went fourth.

As the only team looking at the scoreboard and hoping Dallas broke 100 apart from the Mavericks themselves were the night crew that works at downtown Los Angeles’ Taco Bell. They didn’t have to prepare any fresh tortillas like last night on this one. As it was a wrap as the city edition Lore Lakers had the Mavs by the pin-stripes, 114-103. No tacos but no dice Dallas.

Staying in California (even though we sadly aren’t), the Lakers roll to the Suns this weekend, where in a Pacific play with Phoenix they hope to continue to rise, lead by the King’s drawn sword.

Time to put it in stone.