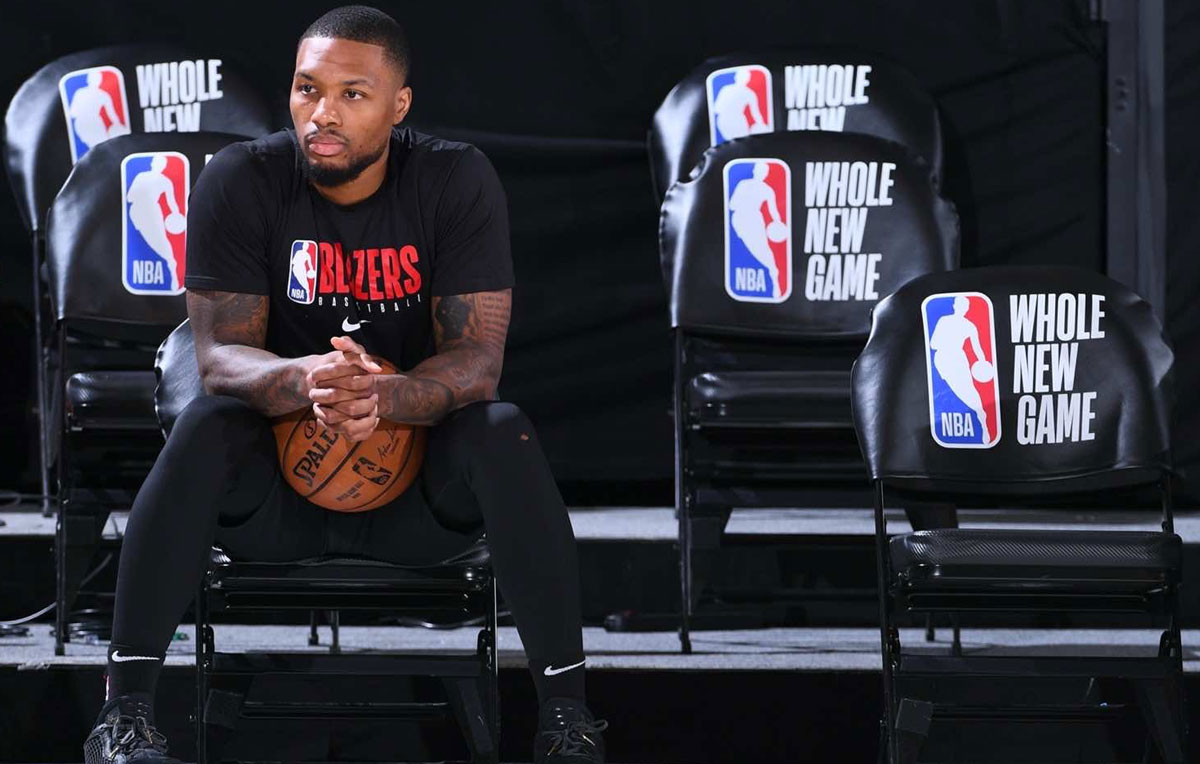 damian lillard put some respect on my name

It is indeed a whole new game and the NBA has never seen anything like Damian Lillard.

Might as well add “NBA Bubble MVP” to the long list of nicknames for one of the coldest basketball players to ever touch a basketball.

Cali’s finest? You can certainly make a case for it right now.

The list of California born NBA players is long and hall-of-fame decorated by some of the best guards to come out of the most populous state in the U.S.A.

The likes of Dennis “Air Plane” Johnson, Reggie “The Knick Killer” Miller, Jason “Mr. Triple-Double” Kidd, Gary “The Glove” Payton, Paul “Truth” Pierce, Ray “Jesus Shuttlesworth” Allen and many others have not only been been setting the nickname trend, but have also shaped the new NBA style that we are witnessing right before our very own eyes.

Although, future sure-shot first-time hall-of-fame ballot earners such as Kawhi Leonard, Klay Thompson can make their own case for the title of California’s Finest with multiple NBA championships. Additionally, James Harden and Russell Westbrook can arguably get the certified stamp of approval with their own collection of individual accolades alone.

Eight years deep, super-teams aside it is time to put some respect on Damian Lillard’s name.

How many more? Like the back of Lillard’s social justice fighting blazing jersey, is what NBA Twitter has been asking every-time the Blazers guard steps on the floor. How about 51, 61, 42 since Pat Beverly and Paul George flared-up family tensions with their Mickey Mouse Dame Time comments.

A ridiculous 51.3 points per game average in three must win pressure cooker games against three playoff bound teams to take control of their own post-season destiny.

“Hit my line, I be coming through in the clutch like Twenty-three in his prime.” rapped Dame D.O.L.L.A on his latest self proclaimed GOAT Spirit featuring Raphael Saadiq.

Much like when he is cooking-up hot 16’s to wannabe NBA rappers with intricate lyricism and bold lines like his end of game stat-sheet — Lillard has been sizzling all-year long serving-up career-high’s across all major statistical categories.

The 6-foot-1 guard from Oakland is set to ascend to elite NBA company, joining Michael Jordan, Kevin Durant, Kobe Bryant, James Harden, Russell, Westbrook and Allen Iverson as some of the most electrifying guards to average 30 points per game. The five-time All-star is also dishing out a career-high 8 assists per game and shooting 46% from the field and 40% from three-pointers.

Furthermore, Lillard joins Wilt Chamberlain as the only two players in NBA history with at least three 60 point-games in a season. Chamberlain, a dominate 7-foot-one center aka “The Big Dipper” had fifteen 60-point games during the 1961-62 season and 9 during the 1962-63 season.

The truth is Dame Time is here and you can’t deny it no matter which narrative is portrayed.

Lack of championship, no post season success? Yes, those are arguable and valid points, but they can easily be countered by Lillard’s loyalty to the city of Portland and his desire to bring a championship to RipCity.

“Since Dame Lillard won’t say it, I will! Before Dame’s last extension he was approached to join a super team! He immediately called me & I’m assuming it’s because he respects me! I asked him, “what do you want to do”?! He didn’t waste a second before he responded, “Big EJ, I want to stay in Portland, build it with my teammates & beat every mf super team”! My response was, “Real ones do things others are afraid to endure.” shared former thirteen-year, veteran NBA point guard Earl Watson who spent his last season with Portland Trail Blazers during the 2013-14.

With the eight seed of the Western Conference nearly locked-up thanks to an impressive 6-2 NBA Bubble restart record, Lillard and the Trail Blazers will have yet another opportunity to dethrone one those super teams, he has been reluctant to join.

In retrospect, this is exactly what Damian Lillard wanted and expected, knowing and feeling that they had to earn and work their way back into the post-season after being counted out during an injured riddled regular season.

Must Read:
Luguentz Dort snaps for career-High 42 against Utah Jazz

A win over the Memphis Grizzlies during Saturday’s play-in game will setup a NBA playoff match-up between the Trail Blazers and the LeBron James and Anthony Davis’ led Los Angeles Lakers.

The likelihood of the Blazers upsetting the Lakers remains slim. Needless to say, strangers things have happen in 2020 just don’t be surprised if your next major buzzing headline read Damian Lillard bursts the Lakers NBA Bubble.

Put some respect it on!