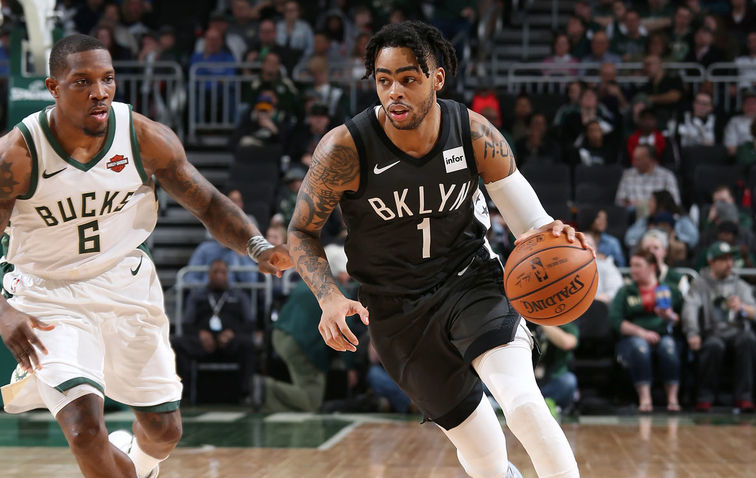 Why fear the deer when you have ice in your veins?

And the calf of Giannis Antetokounmpo isn’t running that night either.

Confetti fell piece by piece on the Fiserv Forum floor last night. Not in a celebration shower, but dribs and drabs like the way it kept stutter stopping the rate of play last night like playing golf behind Charles Barkley. It sure made for a great way to Rajon Rondo put someone off their free throw technique as players would go to the line and play clean up like it was all in good nature. Commentators thought the ticker tape was to coronate the Milwaukee Bucks 60th win of their beast, best in the East NBA season this Saturday. But it was actually a still standing and floating souvenir from last week’s epic gig by British band Mumford and Sons, touring their latest definitive ‘Delta’ album for this arenas first sellout. And even if it was the former like Forum balloons floating down to a Lakers Game 7 floor as the Celtics walked off it champions, D’Angelo Russell’s ice box made sure that party was over before it even got started like parents coming home early. He’s elimination familiar to turning what should have been a celebration at home to a heartbreak hitting the road. Ain’t that right Lake Show? That’s all too familiar hey? Lo made sure confetti would not rain or reign tonight. Unless it was to fall on an empty floor of home losers who couldn’t protect this house.

There would be no sweet 60th win tonight.

Last night there was more chance of a fiftysomething celebrating hitting sixty. But then again with most 50 year olds these days looking like Keanu Reeves or Paul Rudd last night (Happy Birthday Ant-Man. If only Scott Lang’s birth certificate wasn’t so small) you’d have an easier time convincing me that these dudes were middle-aged than believing that these Brooklyn Nets weren’t going to make the playoffs this campaign. Even if in the Eastern Conference standings right now there’s more spots open than Clearasil, with everyone pouring everything they’ve got into this last half week with the West already set.

Despite the Bledsoe show without the Greek Freak notching a Lew Alcindor 33 to go with the rest of the 100, D-Lo had 25 points and 18 in the first half, to go along with a double trouble of 10 rebounds as he cut the nets in Wisconsin. Bucking the Bucks 133-128. But this ice tray was a finger to pulsing vein attack that was perfectly balanced like Thanos dagger, or like everything should be. The B.K.N. are in the endgame now. But they’ve got the avenging heroes before their season turns to dust, like a former Showtime star that Magic mad titan Thanos-ed away with a snap of the fingers like he almost did half of his team this year.

Turns out this kids a real Marvel captain. Turns out he’s more than a leader. The SLAM cover crowned B.I.G. new King of the real New York is a team player too. For the people. Imagine that. If he ruled the world. Nasty like Nas with that pure shot. He is the one. And they’ve built a five around him in the borough of Brooklyn. A seven zip run to end the fourth and the final score of this game with the Bucks not cashing anything in for two and a half minutes was capped by a three pointer from this year’s All Star contest winner in Charlotte, Joe Harris (to go along with 14 and 6, LeVert’s 24 and Chris Dudley’s sweet 16) as these Nets moved to 40-40 like former owner Jay-Z’s nightclub and a perfect .500.

Soon the confetti won’t have to wait to fall through the nets of a no sleep in Brooklyn celebration.

No sleep to the playoffs.

Brooklyn is most definitely in the house.