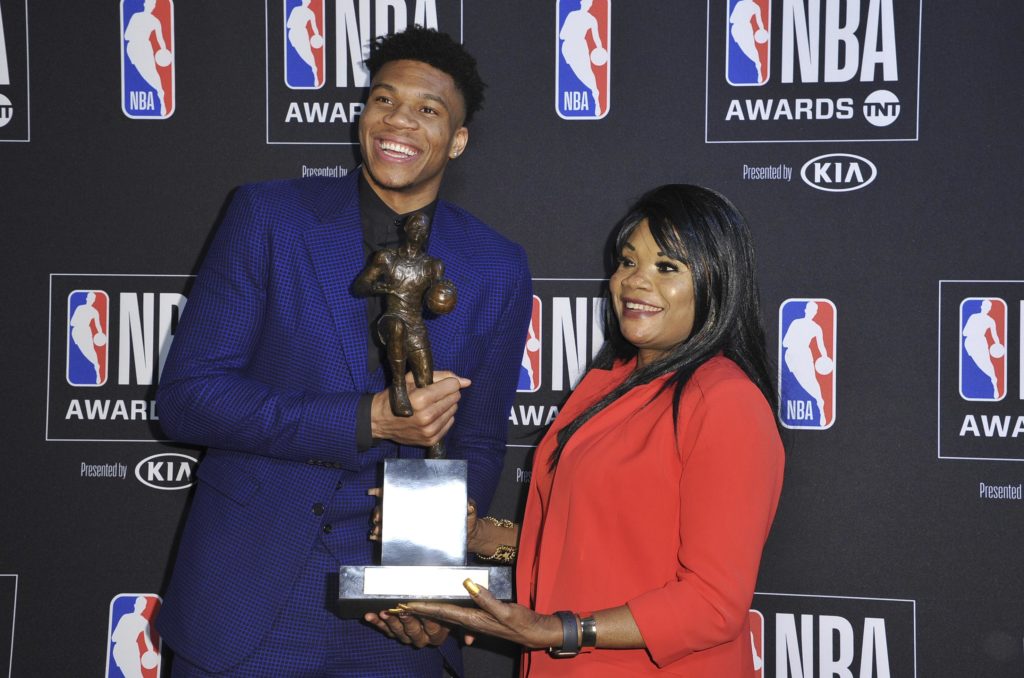 Santa Monica, California was on an award tour like A Tribe Called Quest for the NBA’s end of season grand prize spectacle last night. Hanging out in the coolest performing arts theatre in all of Los Angeles (my apologies to the Hollywood Bowl), the converted airplane Barker Hangar played host to the 2019 NBA Awards. The Emmy’s, Oscar’s and Grammy’s of hoops Tony.

The best of the Basketball best and the cream of the future hops crop descended on this hangar, suited and booted like they were flossing injured court-side.

Shaq sized in the perfect setting in a place that houses feats of brilliance that take flight like Mike, this event could only be hosted by the one and only, Big Aristotle of the Diesel, Shaquille O’Neal (sorry Drake. Although you troll NBA players better than Kevin Hart telling Kenny Smith he’s so ashy if he smiles his lips will bleed as he goes to take a sip of his water). And the most entertaining NBA player ever (give him his award) laughed, joked, sang, rapped and danced his way to an enjoyable evening in the place he racked up three rings on repeat.

But how about the prize giving? Well your real Most Valuable Player this year is Giannis Antetokounmpo. Say what you will about last year’s MVP and this year’s runner up in the closest of recent races as tight as the Rookie of the Year voting, James Harden racking up triple-doubles like Charles Barkley says Lonzo Ball does triple-singles, but it’s the Alphabet’s time now after slaughtering this season gone. Sure he didn’t come away with the ‘chip like worthy candidate Kawhi Leonard and his (we still hope) Toronto Raptors, but that is his next challenge for the Mamba Mentality tweeted in congratulation by Kobe Bryant who predicted this MVP years back. And in a beautiful and emotional speech, Giannis dedicated all this to his dearly departed dad and his brothers and mom in attendance as every eye not dry in the house got out their seats in unanimous ovation.

And in a truly global game flying the flag outside the United States for each category winner, Antetokounmpo almost doubled up, finishing in second place for Defensive Player Of The Year, under the stifling Eiffel of French fly swatter, Rudy Gobert. As Paul George after an incredible season-no lucky shot-came in third place like he did for the MVP voting. Toronto not only got the ‘chip in the Six however as their X-factor Pascal Siakam came up with the Most Improved Player award ahead of Sacramento sophomore De’Aaron Fox and Brooklyn’s own (if they play their free agent cards right), D’Angelo Russell.

Coach of the Year was bucked by Milwaukee’s Mike Budenholzer dry-erasing for the MVP. And Bradley Beal was passed the Community Assist Award for all the good this All Star has done. Give him a hand for all the ones he has. Whilst the Sportsmanship award went to new Utah Jazz guard Mike Conley Jr., who also racked up the Teammate Of The Year award for his grit n grind time with the Memphis Grizzlies. But who else for the Sixth Man of the Year award then the ‘6 Man’ of all-time, Lou Williams? Joining Clippers teammate Jamal Crawford as the only player to win the Sixth award three times over.

And the House Of Highlights Moment of the Year of course went to Derrick Rose. Can you guess for what game?

We have a ball rattling around the rim forever in Toronto that shoots for even more stars though.

But how about that Rookie of the Year award? Who you got? Because in narrowly beating out Atlanta Hawk Trae Young it’s clear the award belongs to superstar right now Luka Dončić after a Maverick season in Dallas. Where the Texan gunslinger from Slovenia is about to draw on them all next season. Look out for the kid like Pat Garrett, Billy.

Sager Strong, broadcaster Robin Roberts took home that award named in honor after the suited court-side with a microphone presenter. And her “make your mess your message” speech was the most inspiring of the night after her fight against breast cancer and bone marrow disease, raising awareness.

Executive of the Year went to Jon Horst of the Milwaukee Bucks (sorry Rob Pelinka…jokes) but the Lifetime Achievement? Well that went to a former President who has just left office. No not Obama (although POTUS does have game…WAP!). But the Magic man, Earvin Johnson. The Laker legend honored in California for all he’s done since starting the fast-break of Showtime, to changing the game behind the back without taking a single shot. All the way to walking away from it bravely when he was diagnosed with HIV and then making a comeback so beautifully for the man who will always be purple and gold with all this entrepreneur pulls out the empire of his top hat. Say what you will about his presidency residency but as we look to free agency this crazy off-season, remember who started all this off by bringing the King to Hollywood last Summer, waiting outside his house in his car at one in the morning.

Now that can’t be tampered with.

Apart from with this. How about one better? In a courtship of rivals and a year of what could have well just been shared MVP and ROY honours, Magic Johnson shared this award of a lifetime with his former, rival and friend Larry Bird. The college to big league opponent who was a Celtic classic legend from downtown Boston. All the way to the parquet green pride of more smoked Red cigars. Two lifetimes for the price of one. Now who cares whose coming in second place?

Because all in all last nights NBA Awards show of All-Stars showed us one thing like the NBA Finals. No matter who took home the gold, we all came away winners.