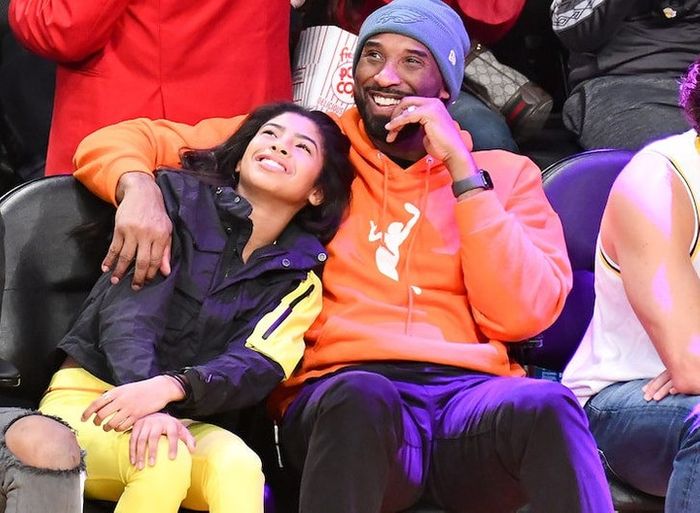 in loving memory of kobe and gigi

I can barely find the words.

I couldn’t even move this morning. 5AM in Japan, phone constant with concern. Jet-lag feels like an unreal nightmare.

I shouldn’t be writing this.

But it’s all I know. All I can do to pay tribute to this man and his daughter like street artists throughout L.A. taking spray paint to concrete canvas in mural memorial as we speak. Or like Cuban, numbers 8 and 24 being retired throughout the NBA like a Jackie Robinson 42. Or those pair of digits up in the rafters of STAPLES with the rest of the banners raised by the man who was about to walk into the Hall like the ‘Dear Basketball’ he walked away from with an Oscar in his left hand. Right palm holding the shoulder of his daughter he raised, who was carrying his legendary load.

All until this truly tragic day.

It doesn’t feel real. Like waking up from a nightmare or some sick hoax.

We all know the news now. The helicopter crash that took not only the life of Kobe Bryant, but his daughter Gianna too and Orange County baseball coach John Altobelli and his family and the poor pilot. We remember them all. We send real thoughts and real prayers to them and their loved ones.

The statistics couldn’t measure up to the man. But they say a great deal. The five-time champ. The Olympic Gold medalist in this year of Tokyo, 2020. The multiple All-Star, MVP and scoring champ, fourth all-time. There are some numbers that don’t need an introduction.

The G.O.A.T. The best ever that we still couldn’t believe couldn’t be back one season like M.J. for one more game. The gifted storyteller penning the wind of his second career to a whole new Academy of glory after rewriting NBA history again and again. All until the cruel and callous fickle hands of fate. Now we can’t believe we can’t ever see him courtside again with GiGi. Breaking the game down to the real love of his life like Vanessa and the rest of his four daughters we are sending all our love to in this devastating morning of heartbreak.

It hurts to write this. But we have to. After the mourning, we have to remember the good times. We have to tell the story of the man and the Mamba Mentality. The man who tore his shoulder and shot through it like a torn jersey. The man who played through a dislocated finger popped back into place like his same shot fading away but never in our memories. The man who tore his achillies, pushed it back in, hit a couple of free throws and walked off the court like the strongest who survived it all. A Mamba a Matt Barnes Spalding to the face fake couldn’t phase. Unmoved. Untouchable. And then he turned him into a teammate and friend like World Peace. This man went to war for the love of the game. Hustle and heart. The Fresh Prince with the ‘fro from Philly who next to the Most Dominant Ever, Shaquille O’Neal became a L.A. King like Magic or LeBron. And now they want to make him the logo like Jerry West for the top gun of the wild one and defensive doberman.

Raise a glass of vino for Vino.

He was our M.J. Our LeBron. Kobe’s game made me want to pick up the pen and put it in words it was so wonderful. He was my first article, so I owe my writing career to him. Without him there is no this. Yep. I did go to Kobe, Japan this December gone primarily because it was the name of my favourite Basketball player. He was named after the beef by Joe ‘Jellybean’ and is an ambassador of the place now. Now the cities motto has even more poignancy. Be Kobe. Alone in the Far East like a sign the night before I saw a Japanese man head to toe draped in Lakers regalia and the number 24. The day after I just wanted to find him and hug him. Without him there is no this. Without him there is no us. No Kevin Durant, Kyle Kuzma, Trae Young. You name them. Your favourite players, favourite player.

This hurts to much to type. My hand is shaking as I write these lines. I can’t go on. But his memory will in the joy former teammate and alley-oop pitch passer Brian Shaw through raw tears told you to focus on. Just as teams in tribute drilled out 8 half-court and 24 shot clock violations in standing ovation chants. As his Mecca of Madison Square Garden turned purple and gold like many arenas and cities bathed in tribute tonight. Just like Gianna Bryant would have continued his legacy as we know she would of been as an WNBA legend until this heartbreaking day.

But know this GiGi was already a great Basketball player. Like Kobe a storyteller and moviemaker.

There were so many beautiful tributes today for Kobe Bryant, but also so many poor practices in reporting. Like TMZ breaking the news before it was confirmed and the family found out. Or the BBC using footage of LeBron instead of Kobe. Forget the distasteful need to be first and do better.

Or the nasty rumour that Laker legend Rick Fox was in the helicopter too. Do people have any idea what that would have done to his family?

I shouldn’t be writing this. Today is not the day for it. But there’s nothing else I can do. It’s all I’ve got. I’m so sorry.

Dear Kobe and GiGi. Playing in the hoop heavens together.