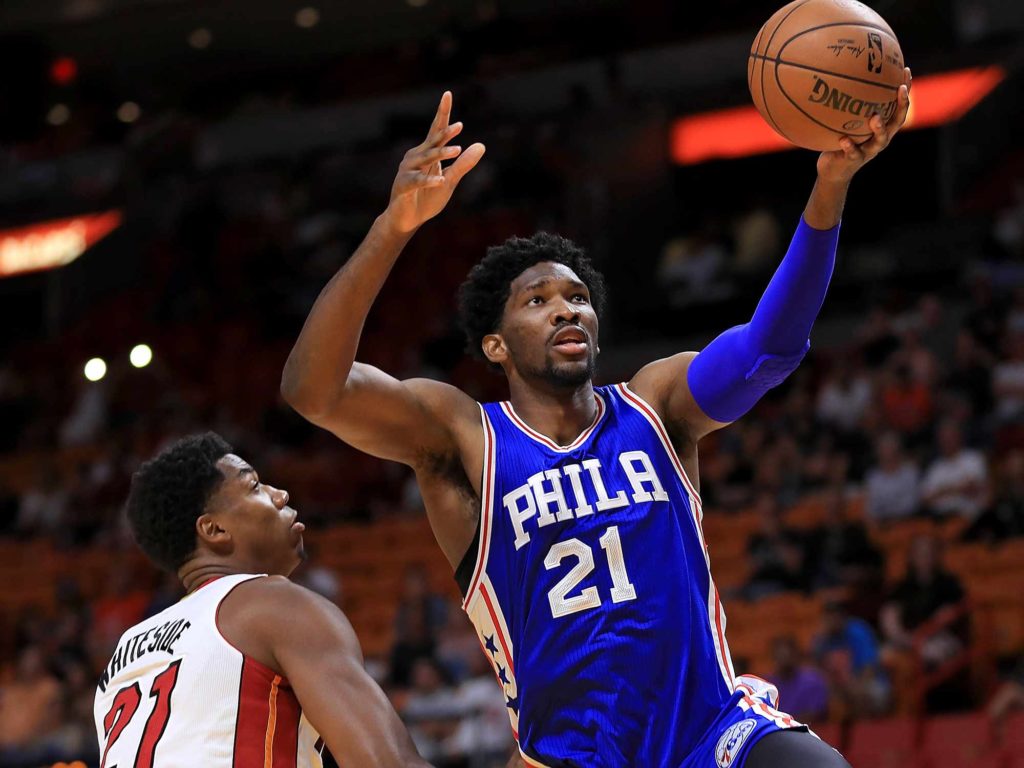 Now all the starting votes and the coaches decisions in reserve have been wrapped up, who remains the biggest All-Star snub this year? No we’re not thinking Russell Westbrook’s benching. Even if anyone who averages a triple double is even bigger than any big-three, or four….yeah we said it. We’re not even talking about the barring of Blazing hot rapper on the side for dolla’s, Dame Lillard of Portland’s Rip City…although you can bet your bottom cent you are about to hear a freestyle about this.

No…we’re talking about what ever process left Philadelphia 76ers breakout star Joel Embiid off the East roster for next months mid-Feb mid-season exhibition in New Orleans.

Why say N.O. to this 20 and 10 in his sleep machine? I know there’s other big men in the East who deserve to beast in Bourbon City (we’re looking to Washington…and Poland), but they aint J.E. This guys more underrated than Jagged Edge…the movie and the R&B group. I know this Louisiana town is the home of the Mardi Gras, but without that funnest most entertaining center in the association we’ll all be screaming ‘Where The Party At’ like Nelly and J.D.

Still, it’s not like Joel will be left at home playing Madden if his NBA Live moment will have to wait for 2K18. It is the weekend around Valentines Day…he may just find himself a date if he keeps trolling Instagram. I mean this is the guy that even had the balls to reach out to Rihanna…that’s got to be worth at least a feet Snap.

Seriously though this kid is one of the best young players in the L. Belonging to the next generation of guys like Isaiah Thomas, Gordon Hayward, Giannis Antetokounmpo and the Lakers quartet. He’s probably one of the best big-men in the league and definitly centers by year end. Even if those pivotal figures are a dying breed in this league…let alone the East. Despite Philly having three of them with the last couple of top draft picks (Jahil Okafor and Nerlens Noel) thanks to the biggest ones bigger injuries. Remember this player is no rookie…or sophomore…even if this is his first full season. We see you Simmons. Keep building Sixers. You’re about to be a monster.

And in the middle of it all will be the man set to follow the likes of Julius Erving and Allen Iverson as the next famous franchise face of the Philadelphia 76ers. After just what the Doctor ordered and all the answers it was always going to be a process, no question. But now you know that P is the perfect prescription.

Must Read:
Rogers Sportsnet outbids The Score and CBC for 2010-11 Raptors Games

So just like the man who knows how to take shots at the commissioner and the President all at the same time it looks like “once again the popular vote didn’t matter”. But I’m with him. The man who will eliminate all that and every fan and coaches team that passed Joel up this year, blocking Embiid’s bid for all stardom. Now tell me are you confident in trusting that process?