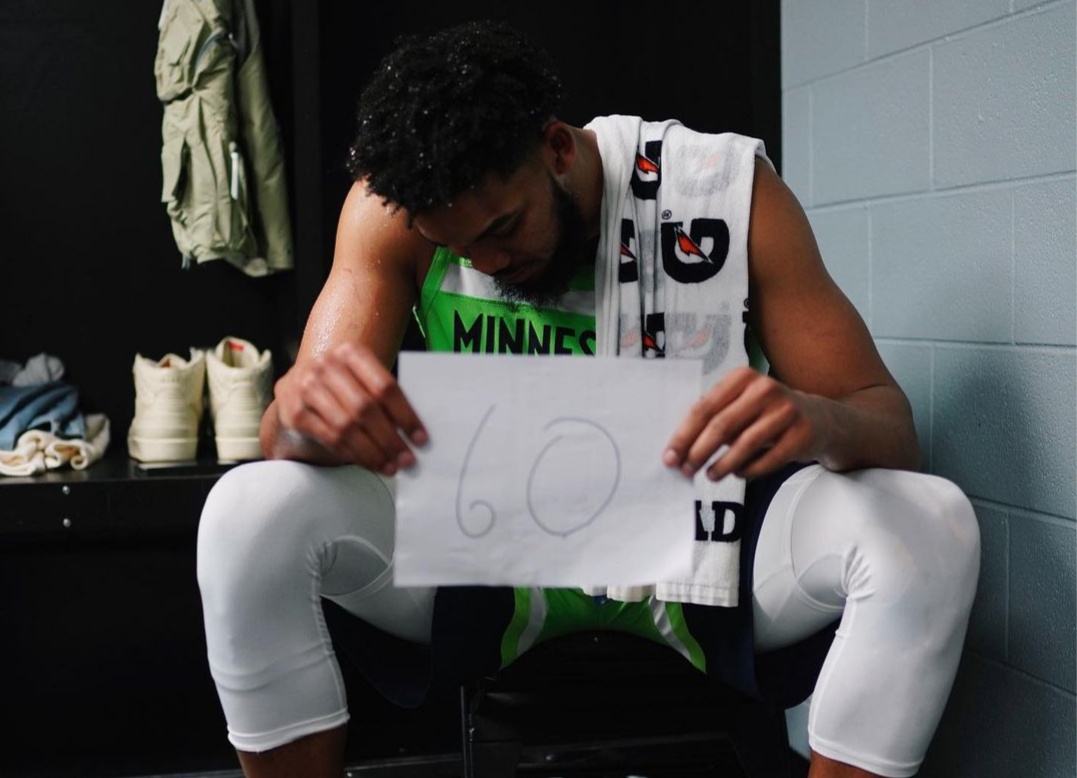 Kat runs timberwolves town with a 60 piece for his mother

Holding up a scrap piece of paper with the number of points you scored scrawled on it like Wilt Chamberlain’s 100 record is a milestone tradition in the NBA.

Devin Booker did it when he set a record 71 for the Suns and now Karl-Anthony Towns has done it after a night like no other in the twins.

Minnesota hasn’t seen massive numbers like this since Kevin Love’s 30 for 30 vision.

A 60 piece off 61% percent shooting, to go along with 17 rebounds. That’s almost 60 and 20 for one of the best double-doubles ever in big-man lore. But 60 off more than 60% percent and 15 rebounds is a new record standard set in the association.

Add Kyrie Irving’s own 60 tonight and that’s the first time two NBA players have consecutively done this since 1962.

It really is a historic 75th NBA season. Especially this last week. One that saw James Harden go ahead of Reggie Miller on the list of all-time three-pointers made. The aforementioned San Antonio Spurs leader Gregg Popovich becoming the leading head coach with the most wins in NBA history. And King LeBron James entering the exclusive 30,000 points, 10,000 rebounds and 10,000 assists club with a solitary reservation.

It truly is a celebration like another great Timberwolves big, Kevin Garnett being honoured in Beantown with his number 5 Boston Celtics jersey retired.

Even last night Towns’ 60 to go along with Steph Curry’s 47 and Trae Young’s 46 became the first time in league legend that three players scored 45 plus on the same night.

The big KAT is in legendary company too. The best shooting big-man in the league going for his own MVP case in the resurgence of the seven footer even took home the three-point contest trophy during this February’s All-star weekend in Cleveland. He was 7 for 11 from beyond the arc during his 60 streak. Convenient from downtown like a corner store.

It couldn’t happen to a person more deserving, that’s been through and overcome so much to come out here smiling and thriving.

But we’ll let the first center with 60 since a 28-year-old Shaq in the year 2000 and his Twitter tell the timeline.

“Yesterday was two years to the date that my parents walked into the ER at JFK Medical Center in Edison, NJ and were admitted with COVID-19. The same hospital that my mother gave me life, and tragically, the same hospital where I saw her life begin to slip away.

Two years later, I walked into AT&T Center with the greatest guardian angel that I could ever ask for and dropped 60 against the winningest coach of all time.

I say this to say…no matter what life throws at you, you can come out of it stronger. Tough times don’t last, tough people do. Miss you Momma. This game….my life…is for you.”

The guardian angel looking down with that same signature smile couldn’t be prouder.

And just like Karl tweeted today to congratulate Kyrie, “Jersey putting up numbers.”

We just hope he held on to his game worn one.

Because soaked in his history and legacy.

And numbers that tell no lie and could never be washed away.