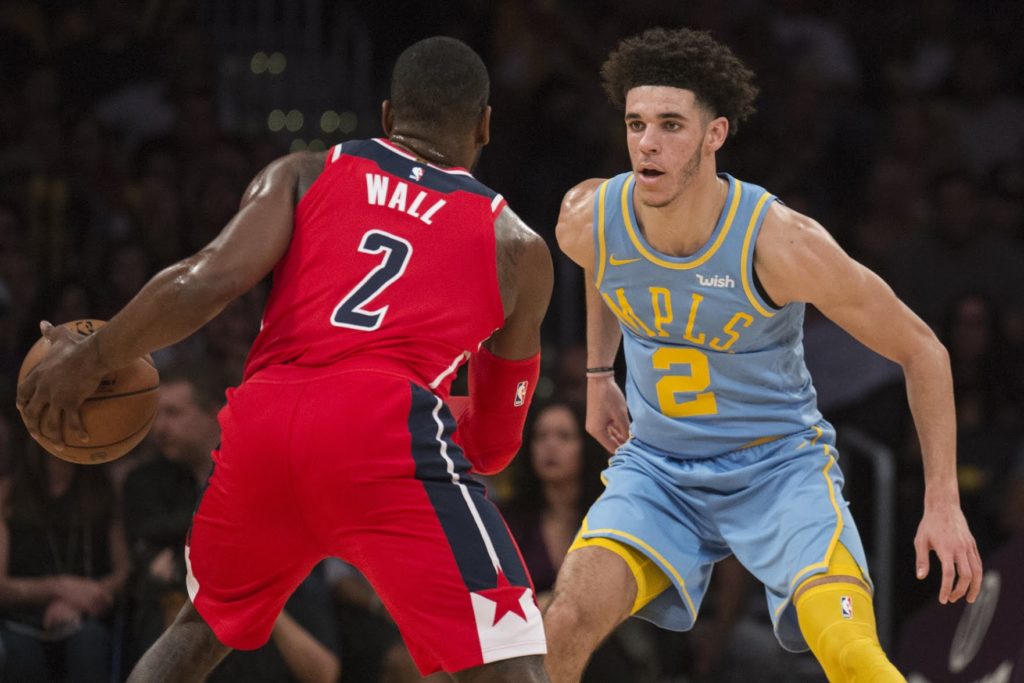 Everyone is coming for Los Angeles Lakers rookie Lonzo Ball’s head because of all the mess his dad has talked as he “big balled” (but have you noticed that Lonzo has said nothing and just kept quiet, proving he belongs here like one of his triple doubles will do soon on the box score?). And Washington Wizards lead guard John Wall out of the nations capital D.C. was no exception and the latest as he vowed to be merciless with the ball against Ball, as his Griffindors headed to L.A.’s STAPLES.

But despite John’s 18 and Lonzo’s struggles scoring like Wall in the clutch, Ball handed out 10 P.G. prototype worthy assists to go with his Kidd like shot, as after failing to capitalize on their 20 point comeback in their last game these young Lakes mounted a 12-2 run with the Ball (holding Wash to just an unlucky 13 in the fourth), that saw them outlast the Wiz 102-99 after one overtime.

Digging deep this raw team took it back in time and took downtown Los Angeles, California to the twin cities of Minneapolis like they where playing Andrew Wiggins and the Timberwolves on the road. Playing in the beautiful sky blue hue of the MPLS Lakers jerseys that they will wear for four more quarters, four times this season the Lakers paid tribute to their original star before the purple and gold and the City of Angels, gentle giant, George Mikan. Just like Kobe Bryant at the three-peat parade after West (44). You could almost hear the tills ringing over the crowds cheers as these instant vintage, Hardwood Classics, Wish come true Nike jerseys were in more demand than those Kyle Kumza zeroes.

And 2K yet again showed that Ball wasn’t the only rook to watch with the peach as his 15 off the bench helped the Lake Show blue overcome 28 from Bradley Beal downtown on L.A’.s street. Still sophomore sensation Brandon Ingram really is the one for the Lakers this season and right now as his 11 fourth quarter points kept the Lakers elastic in this tight game down the stretch. B.I. had a team high 19 to go along with a double deuce of 10 rebounds off the glass.

But in this social media hyped Ball v Wall it was another Kentucky Wildcat alumnus and the junior who started this youth in revolt off, young Julius Randle who was key like Kobe having the pick to every lock in the city of Los Angeles. Randle had an all ball big block on Wall that turned the “no mercy” and bricks round on him. Before he was found all alone on the other side of the court for a wild, breakaway dunk that capped off the night and is how this young Showtime team puts the dagger in you. The big man even hit a big three like his name was Brook Lopez.

And as the seconds turned to red around the glass Lonzo Ball stood and did nothing. No harm, no foul as he let an off-balance Wall behind him tumble a chance to tie or take the game into another overtime as the next generation got over the Wall from D.C. that fell like a house of cards.