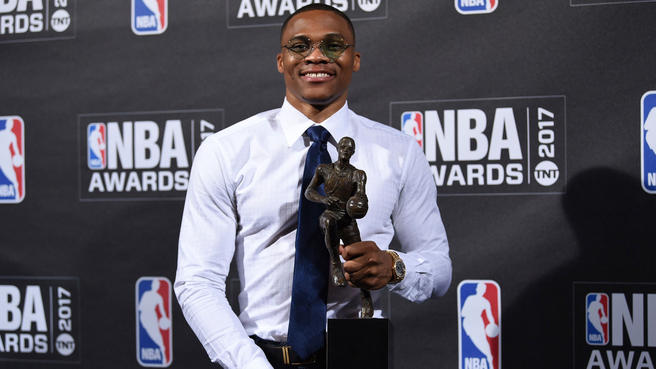 Russell Westbrook Is The Real 2017 MVP…And Why Not?

“Huge congrats to Russell Westbrook on MVP, that boy went out there and was a created player on 2k all year, F—– balled out. Gotta respect it!”-Kevin Durant.

Golden State Warrior king and NBA Champion Kevin Durant just had to give it up to his former Oklahoma City Thunder teammate this week. As the NBA Finals MVP may be a winner with a ring on his finger, but like K.D.’s mum, Russell Westbrook is the real MVP.

And you don’t even have to ask why?

Beating out another former OKC teammate in the bearded form of another triple-double machine, revolutionizng the point, James Harden. Westbrook went from jersey number to hero this year, beating the Big O, Oscar Robertson’s almost half-century triple double total record for the season with 42. But more importantly he took and put a team whose jersey Durant pulled off his shoulders on his back and did it all, beating the logo on his chest like Kong until the whole of Oklahoma roared so loud you could hear it way back in Seattle.

Sprinting down court at sonic speed, diming or dunking with trademark thunder this is the era of Westbrook reign. Even his other boss Michael Jordan co-signed with the personalised Air Jordan note and seal of approval that simply congratulated these words of encouragement, “I was MVP before I was champion too”.

In a emotional speech Russell, an ahead of his time trendsetter who also won the Style Award got real personal with his teammates surrounding him, having his back as he kept it real simple but sublime with a straight forward shirt and tie look to go with his spectacle frames that compliment his spectacular game.

In this new ESPY’s like format for the new NBA Awards happening postseason as oppossed to a playoff precursor there was plenty of glitz and glamour for this gold occassion. The first night hosted by Canadian rapper and Toronto Raptors owner Drake really was blinging like hotlines too. Plenty more answered the call as ‘Sixth Man Of The Year’ went yo Eric Gordon and not former T-Dot ‘6 Man’ and former Rocket teammate now sent back to L.A. as part of the Chris Paul package, Lou Williams despite his legendary year with the young Lake Show.

Gordon’s H-Town leader Mike D’Antoni took home ‘Coach Of The Year’…or should we say ‘James Harden Game Changer Of The Year’ award. Defensive Player Of The Year went to who else but Warrior Draymond Green, sporting a beautiful blue Y.S.L. suit jacket…and some shorts. Rookie Of The Year went to Milwaukee Buck Malcolm Brogdon, whilst superstar teammate Giannis Antetokoumpo in a year of Point Guard revolutionaries took home the ‘Most Improved’ nod. And probably will every year for the rest of his career with the amount of facets he adds to his all over the court, every position versatile game.

But in a night for the year that saw good Charlotte Hornets player Kemba Walker win the sportsmanship trophy and Boston Celtics superstar Isaiah Thomas handed the Community Assist Award like he gives out passes, it was great green Celtic giant and legend Bill Russell who won the Lifetime Achievement Award. And what more could you expect from a man who is literally the Defensive Player Of The Year trophy? And as he was presented it by a team of elite, legendary centers he pointed at Kareem Abdul-Jabbar, Shaquille O’Neal, Alonzo Mourning, Dikembe Mutombo and David Robinson one-by-one and whispered, “I’d kick all you asses”!

But last night the last one belonged to a new legend whose rest of his life and career is ahead of him until the clock reads 0.00 and the rafters O.

Kevin Durant may be your finals MVP, but the Oklahoma City Thunder knows whose Most Valuable.