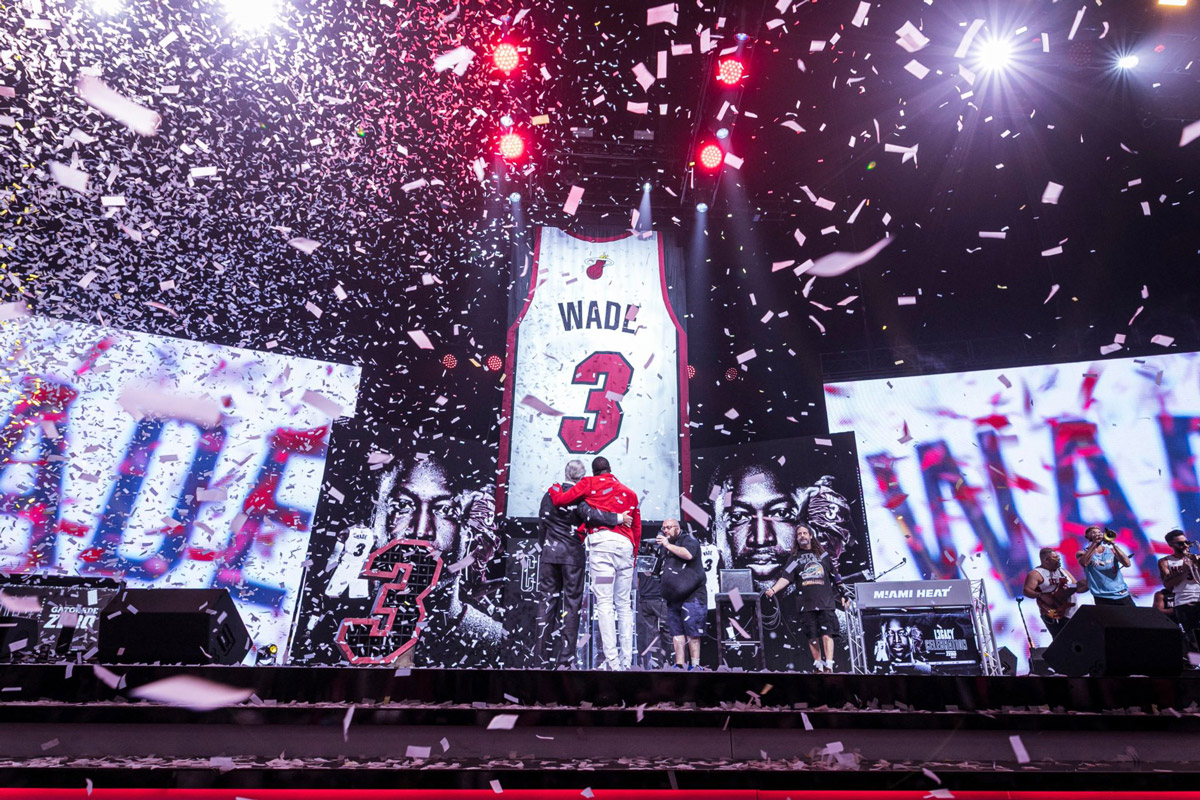 wade in the rafters the heat rises to 3

How’s this for a Flashpoint in NBA history?

Tonight the Miami Heat gave us ‘The Flashback’. DeLorean riding back to the future of last season. Were Dwyane Wade rocking a red Heat hot bomber jacket that was all “Great Scott” Marty McFly had his number three jersey under all that retired, as the Heat rose his 3 to the rafters in a flash.

After ‘One Last Dance’ for Dwyane last season were he swapped jerseys like trading cards, Wade and his former coach and President Pat Riley watched his last jersey go up past the nosebleeds to the ceilings he smashed, arm in arm like a proud father watching a home video of his sons wedding on the highlights of the jumbotron.

The relationship is exactly like that. Built on a fatherly foundation.

Miami has had a matrimony with Wade from the Chicago towns own All Star start, championship run on his own and then post Bulls and King reunion return to redemption.

Some may say Shaq. 90’s purists Zo Mourning and Timmy Hardaway. Others the greatest of all-time LeBron James forming like voltron with another Heatle that’s about to have his jersey retired, Chris Bosh. But let’s face it when it comes to Miami Heat players and franchise faces, D-Wade is the G.O.A.T.

This is the way of Wade. How its been and how it will always been up in the air of those American Airlines. A father first and always part of the Miami family when the South Beach welcomed him like Will Smith, this guy is for life like Bad Boys and the number 3 that Martin Lawrence’s Marcus has framed in his own living room rafter raise for the latest sequel.

What you gonna do?

This was a Florida city union like pink or turquoise neon, or the ’till death do us part loyalty of ‘Bad Boys II’ and ‘LA Finest’ spin-off star Gabrielle Union. The port of Miami Rick Ross rocked the mic and even King James sent a video tribute from his Californian Lakerland as fellow retired club legends Chris Bosh and Ray Allen were in awe attendance.

“Life is good” Wade said like Nas for this two hour special that seemed ready made for an ESPN documentary. 30 for 30 or 3 for 3.

Must Read:
No one has won more NBA regular-season games than Gregg Popovich

3 in ’03 to infinity for his sweet 16. The sun will never go down on the legendary legacy of Miami’s adopted son.

And in a tragic start to 2020, like Chi guy Wade embracing an emotional Allen Iverson in a Kobe number 8 tribute throwback this moment was the answer to the pain from our prayers.

Now all that is left is one last step to the Hall.