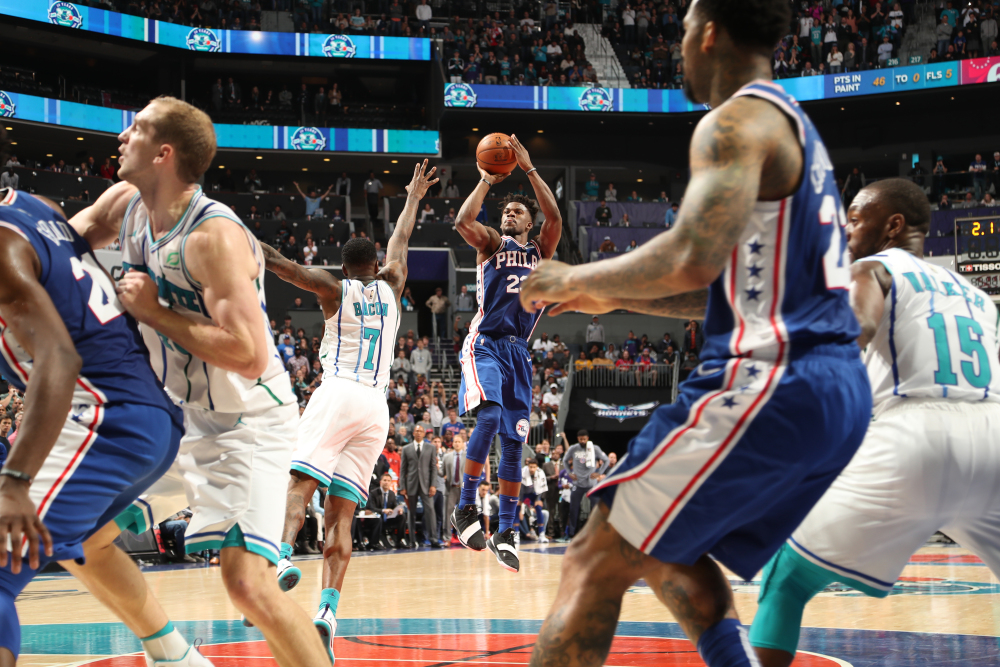 Silver service is the new gold standard for Philadelphia’s freedom and the soul of their process. As new superstar Jimmy had that thing like Hendrix last night in Charlotte.

Buzzing behind Kemba Walker’s sublime 60 (isn’t it time to recognize even stuck in North Carolina under Jordan’s Jumpman, Kemba is on first-name terms as one of the league’s own, top ten best?) and in the vintage, Larry Johnson Grandmama jerseys and court design, Charlotte had Philadelphia in the crosshairs of their pinstripes. But Butler with just 15 in reply turned on the Mamba Mentality like young, hometown hero, ‘fro Kobe back when the floor of the Spectrum always looked like this (YouTube it, or search through all your old videotapes 80’s babies). Running wild like his own iconic hair in overtime. Hitting a 15 foot game winner from the honeycomb with less seconds than the Fish that saved LA with 0.3 to go. Hitting it in Dwyane Bacon’s grill, sizzling like vintage vinyl and silencing the Hornets nest, 122-119, O.T.

Three-point specialist, gunner for hire, J.J. Reddick dared Butler to do it. And boy did he do it. Cutting the Spectrum lights off for the team with that original arena name. Joining his 23 like Ben Simmons who also had 11 rebounds like Joel Embiid, who led everyone indeed like the process he started with a Kareem like 33. Trust us if too soon to call a bust, Fultz booms and works on that charity stripe donation like he does a few other things than the Sixers starting five will be more than anyone can answer or handle like A.I. with the rock. It’s more than a big-three of a holy trinity of sought after superstars in Philly for the post number 3 generation of greats. Just when you thought that the Celtics famous five was the only thing that could possibly take down the Warriors golden state of beautiful basketball, dynasty dominance (apparently apart from themselves now). Philadelphia are rewriting the process, getting to the finish line quicker than the King’s Hollywood ending over in the best coast, city of stars.

Now Jimmy is out the dog-house of his dog days in Minnesota’s wolf pack. The hangover is over. And now the former Bull boy has upgraded his Karl Anthony-Towns and Andrew Wiggins big-three with Embiid, sophomore, simmering Simmons and the big 3 of J.J. One taught him love, one taught him patience, one taught him pain. Thank you, next. Philly are now rocking and ringing the bell of their own full-court freedom. Running up those Rocky steps faster than ‘Black Panther’ Michael B. Jordan’s Creed too just in time for Thanksgiving, no turkey.

And the Michael Jordan had to process all of that last night in just 0.3 seconds.

He knows the feeling.