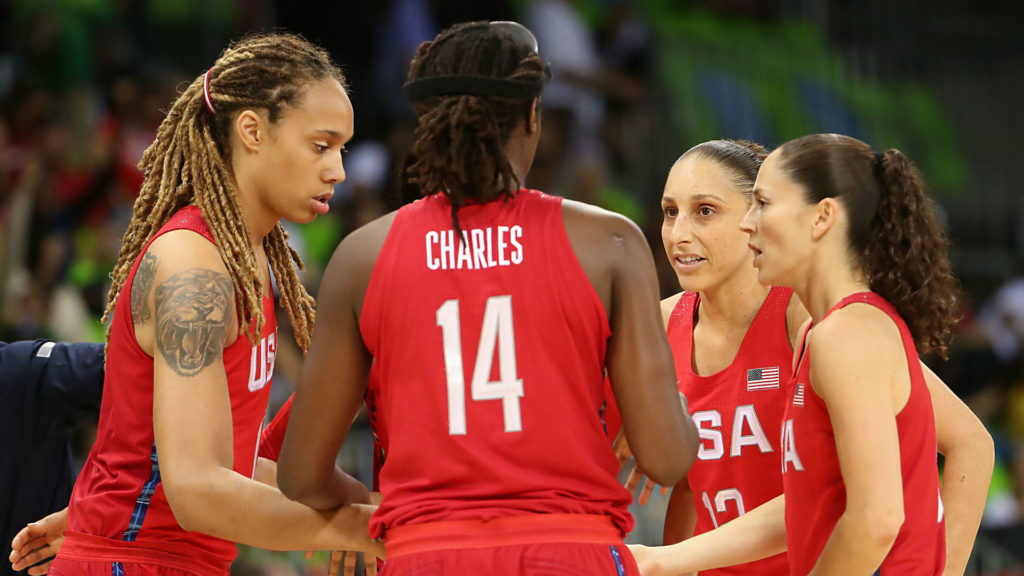 They say this is a mans game…

…but it’d be nothing without the women!

Team U.S.A.’s sister side are the real Dream Team.

Yeah we said it!

And we’re not just talking about these 2016 Rio Olympics. With all due respect to the mens side, these women have been doing if for years. Don’t call it a coming out party. They deserve as much respect as the the other team they shared a flight to Brazil with.

And you haven’t heard his response yet have you?

Sure the men have been unfairly criticized for not running away with games, even though they are on a 5 zip sweep. But the rest of the world is just getting so much better at basketball. That goes for both genders. But the U.S. women have been blowing out every comer too. To the tune of a 204 point differential over their own 5 and zero record.

And as they finished off their preliminary group stage by extinguishing the Peoples Republic of China by 105 to 62 you might want to catch them while you can during this last weeks coming knockout stages. Don’t expect them to lose mind you, but with the quarters tomorrow, you only have three games before they hit gold and a flight home.

Sure it’s arrogant to just assume Team USA will win. And just like with the men there are no guarantees. But if we were a betting site, we know who we’d be putting our dollars on. But forget your nickles and just enjoy the dimes in the quarters for what this great basketball is…the real beautiful game.

Sure the mens roster don’t have King LeBron and MVP Steph Curry on their side this Summer, but the women are playing without big superstars and household names like the Los Angeles Sparks’ Candace Parker and Skylar Diggins of the Dallas Wings themselves.

We just roll called the entire roster. Why? Well it may sound like a cat poster but they are all winners. As a matter of fact just like Usain Bolt smiling at the camera mid-race we can’t remember the last time they lost. That’s because they own a 60 and nothing record since their mid 90’s inception, that includes a 52-0 exhibition and 8-zip Olympic record. Now these ladies are looking to win their sixth straight gold after their 2012 Olympic victory in London.

Hey they may aswell forget Tokyo and look to get ready for a Los Angeles homecoming in 2024. Because we know who will be winning that one even before we find out who the confirmed host is.

Last night Sue Bird lead an inspired Instagram video post, showing solidarity to great ‘Ghostbusters’ movie-event of the Summer star Leslie Jones (I.G. handle; @Lesdoggg) who has received her absolutley unfair share of heinous racist and sexist abuse via vile Twitter trolls just because she was in an all female cast of a classic movie remake (which shouldn’t even be a reason). The team urging the actress/comedian currently taking in all sorts of Olympic events in Rio to come watch them play. It was a beautiful, enthusiastic pitch of a video that may aswell have been a plea to all of us, or the lack of true basketball purists who just don’t know the game if the don’t know the names of these girls.

Because this isn’t just another reboot…this is the real thing!

Time to stop expecting great and respect it!