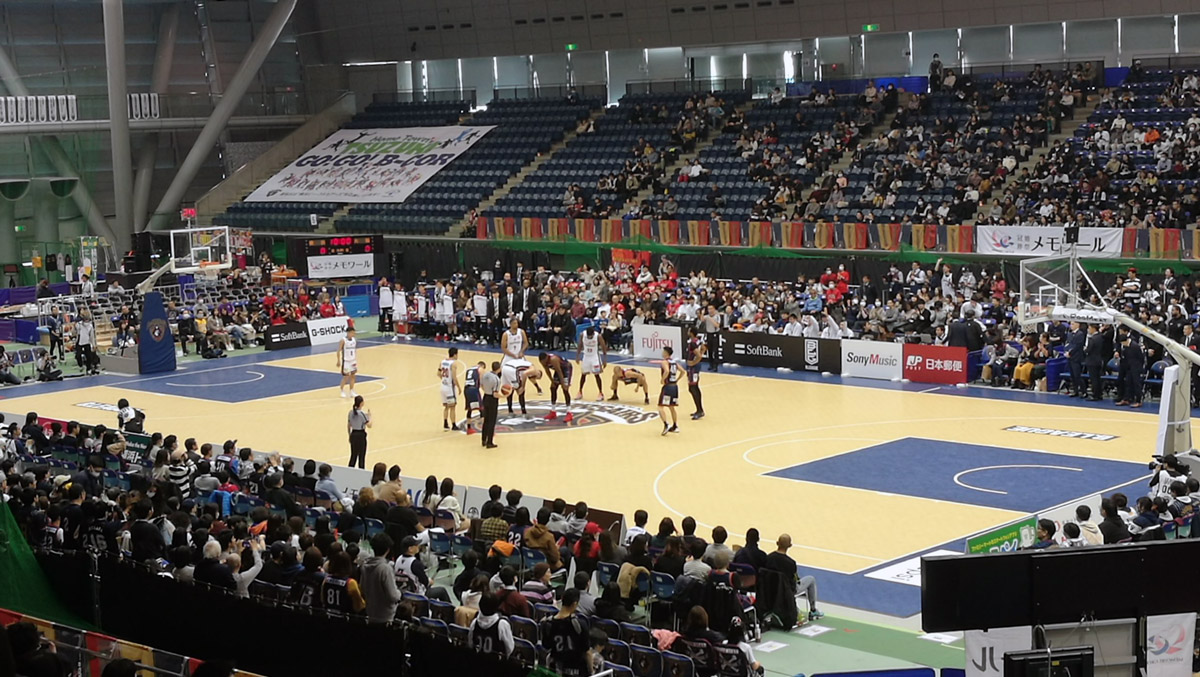 Rookie Rui Hachimura and sophomore Yuta Watanabe lead the new class of the next generation of basketball coming out of Japan. And this really is the year for the land of the rising sun, as this is the 2020 year of the Tokyo Olympics that will not only feature the best basketball players in the world going for gold from Team USA to Spain, but also concrete hold the debut of 3×3 Basketball on the streets of Tokyo being an actual Olympic event.

A lot of history is going through Japanese hoops this calendar.

And with this writer living out here on a one year visa, trying to write his own Olympic dream, it’s only right we check out some local basketball courtesy of the Yokohama B-Corsairs who played host to the Osaka Evessa this weekend and BasketballBuzz was in attendance to take it all in.

But Yokohama (which I will call home for the next 12 months) wasn’t exactly the best host to the outstanding city of Osaka (I vacation visited last fall like Michael Douglas and Andy Garcia on the way to visiting Kobe, Japan for reasons you know why…of course not the beef, I’m trying to go vegetarian), as they beat them 75-70 in a game as close as quarters that went back and forth all 40 like Aaliyah. Ending on an epic, breakaway clutch lay-up that is quite possibly the best end to a live game I’ve ever caught. And I’ve seen Washington win on a past the buzzer decision in London, seen Toronto go to two overtimes and even been lucky to see the likes of The Answer, The King and the one and only Kobe play.

But you just had to dive in to this one set in Yokohama’s gutted and drained international swimming pool which really showed new depths of arena architecture. Kids play areas and merch stands filled out the rest of this sports spaces lengths. Fans in attendance eating pork cutlets over hot dogs (the country is different, but the court culture like the passion and the game are the same) were given cardboard “Go Yokohama” banners that folded into almost traditional fans for the fans that when clapped sound like nothing else you’ve heard in celebratory passion. The international feel of Olympic Basketball this Summer in Tokyo will feel like it’s on a soccer fever pitch if its anything like the B-Corsairs.

And when the iconic port town Yokohama captain logo turned into a skull like the ‘Pirates Of The Caribbean’ you just knew it was on like Donkey Kong by the barrel load.

New 36 year old Yokohama head coach Shogo Fukuda debuted with a win after taking over the helm from 70 year old legend Tom Wisman this week. Reginald Beckton lead the way, dominant inside with a 31 point and 15 board double. Whilst James Southerland added 15 for his efforts, to go along with 11 from Aki Chambers and Shusuke Ikuhara’s 8.

Osaka gave all they’ve got however as Josh Harrellson going toe-to-toe with Belton had his own 25/13 double/double. Whilst Richard Hendrix jammed 23 and kept the defence honest with 3 steal swipes. But we all know which steal took it all like ABBA.

It was the last lay-up that left a lasting impression on this visitor and the visiting Osaka who had Yokohama on the ropes 38-33 at the half. These two teams play again as we speak. This writer for sure too will make port with Yokohama Basketball again.

Must Read:
Canada at the 1959 Pan American Games

The Japanese road to the 2020 Olympic Basketball campaign in Tokyo starts down the floor and in pools like these.

As promotional posters all around this port town tell you to “beat the old you”, the motto of this team is, “be courageous” and that’s a message we can all go home inspired with.