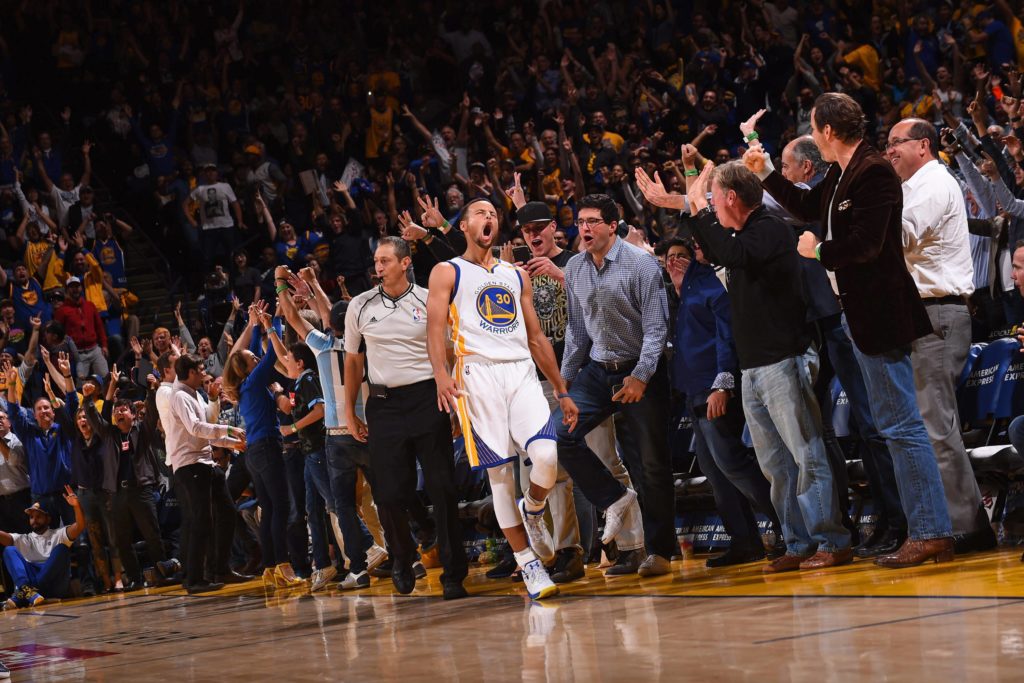 The Chef laid table 13 last night against New Orleans, as Stephen Curry got even hotter than his two time MVP reputation as he ignited downtown Oakland with an NBA record 13 three-pointers from beyond the arc.

Breaking milestones seemingly out of range-like his Golden State Warriors team did regular season wins with their 73 in the last 82, charging down Jordan’s Chicago championship stampede-Steph Curry was definitly with the shot.

Letting it fly against the Pelicans, letting it fly. Out in the Pacific to be specific this was more than a drop in the ocean Splash Brother.

Klay may aswell have taken a day off. Even big numbers big man Anthony Davis of Orleans and his MVP candidate campaign ballots, (not to mention 33 for the game) couldn’t out count this.

Curry wasn’t just on fire, he was the earths core. Making 39 points from three-point land, the orange basketball was magma as he erupted. From now on dub downtown as his territory.

And you thought no one could shoot it like pops or Coach Kerr!? And you thought Steph Curry’s big-three was now just Kevin Durant, Draymond Green and Klay Thompson?!

Breaking away from the dozen record he previously split three ways with Kobe Bryant and Donyell Marshall, this was the only way Stephen was going to come back after the Warriors bogey team, former assistant Luke Walton’s young, new Lakers beat them in their coastal California clash. Putting an end to any realistic look of another 73 winning season and their back-to-back MVP leaders long, three season encompassing streak of 157 consecutive games with a three pointer. This was the only way in the screen of KD trey’s shadow that Curry could pick his spot, roll and make his name as the leader of the Golden State Warriors again.

Send that back to the kitchen!

In this 2K age in reality it looks like Steph Curry is the only one playing video games with the sliders set to full, on fire like NBA Jam. Now he’s scoring and scorching it looks to get no hotter in California than this Oak Town Fantastic Four lead by the Human Torch. Its a thing of beauty watching him ignite like a sunset on a cool Cali evening by the sea. You just know it’s going to drop…

All told Mr. Stephen Curry had 46 points to go with 5 rebounds and assists as his soon to be San Francisco Warriors beat the one-time New Orleans Hornets, now Pelicans 116 to 106. But the details hardly mattered. After the man with seven games with 10 three pointers in his career made a record 13 in this single game he made more than his Western Conference team win.

He made NBA history.

Once, twice, three times a legend.