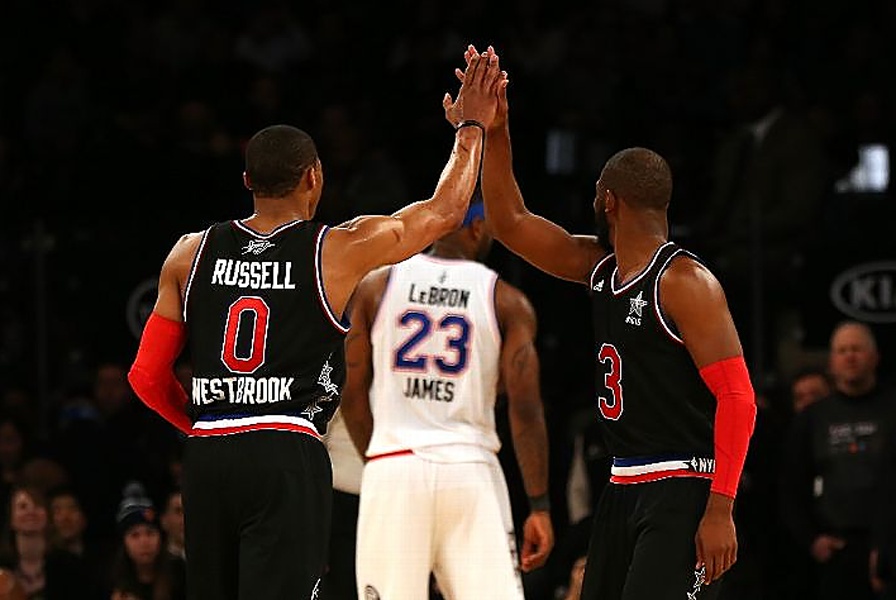 Stars flocked to the Mecca this weekend, as NBA Basketball woke up the city that never sleeps for the sports annual Superbowl of the All-Star Game.

The whole weekend illuminated Brooklyn and New York City like Times Square as Madison Square Garden finally saw quality basketball this year led by Carmelo Anthony. The whole weekend was where amazing happened. From the three-point to dunk contest. Rising stars, celebrities and the game itself. As B.K’s Barclays Centre shared the mortgage of housing honours with M.S.G.

From funny Subway stop photo ops and collectible passes, to the hotbed of hoops talent being burnt into the bright lights of neon, N.Y.C. gave Basketball it’s deserved household fame back at its true home. First off in the Rising Stars game, Canadian rookie and Minnesota adopted Andrew Wiggins continued his Kobe-like start to his career with an MVP, 22 points as the World beat the U.S. 121-112.

Then after former Toronto Raptor Chris Bosh’s Miami team won their third straight Shooting Stars competition, leading comedian Kevin Hart went one better winning his fourth straight MVP in the celebrity game, for New York Knick Carmelo Anthony’s team. A game that featured everyone from rapper Common to comedienne Sarah Silverman. Still Hart handed his award to the real Most Valuable Player, U.S. Secretary of Education Arne Duncan, who had the last laugh schooling everyone with 20 points, 11 rebounds and 6 assists. Then the ‘Wedding Ringer’ star and four time, bball dominating MVP announced his retirement from the game, stating “I cant do no more”. The basketball world hasn’t lost a great this good since Mike.

Then in the downtown deep, three point contest, Steph Curry with 27 shots like a Bird only had one question when winning. Who was coming in second place? That would be hot shooting Kyrie Irving, then paced in third place by Splash Brother, Curry, human torch hot teammate Klay Thompson. Zach Lavine made the Slam Dunk Contest that much more exciting though, taking it to the hole with a variety of through the legs, eyes over the rim rockers. Winning in a weekend devoted to a new Wolf pack of Minnesota talent! The 19 year old kid was even breaking out the Michael Jordan, ‘Space Jam’ Toon Squad uniform as he said “that’s all folks” and beat singing Victor Oladipo, who still hit some 360 degree high notes. We just wish Milwaukee’s Greek Freak could have put down some of those long limbed, stretch armstrongs.

The 64th All Star Game was no sideshow either as the West(Brook) beat the East 163-158 behind MVP, Oklahoma City Thunder star Russell Westbrook’s almost Chamberlain record wilting 41 points. His big play made for a big night where snubs turned to subs and an All Star fashion parade-from the warm ups to the uniforms-talked the talk more than the debut of a court-walk of a new NBA Fashion show. One designed by league entertainment C.E.O. LeBron James who described the ultimate king of hoops Garden as a place that cant be beat. Maybe suggesting that there’s some Knickerbocker, free agent regret (well wine bathing Amar’e Stoudemire has just left a spot free) along with that dunk contest hindsight. Come on ‘Bron you know you want to! As the last dunk of the All Star, all air affair brought the paper bag crowd of Madison Square off their seats, on their feet and out of their grocery shells, the NBA and N.Y.C, put on a great Valentines show for all-Basketball lovers. Even with stars like Kobe Bryant, Blake Griffin and Anthony Davis out amongst the who’s who of spectators.

Now the Big Apples had its bite of big Basketball, here’s to 2016.