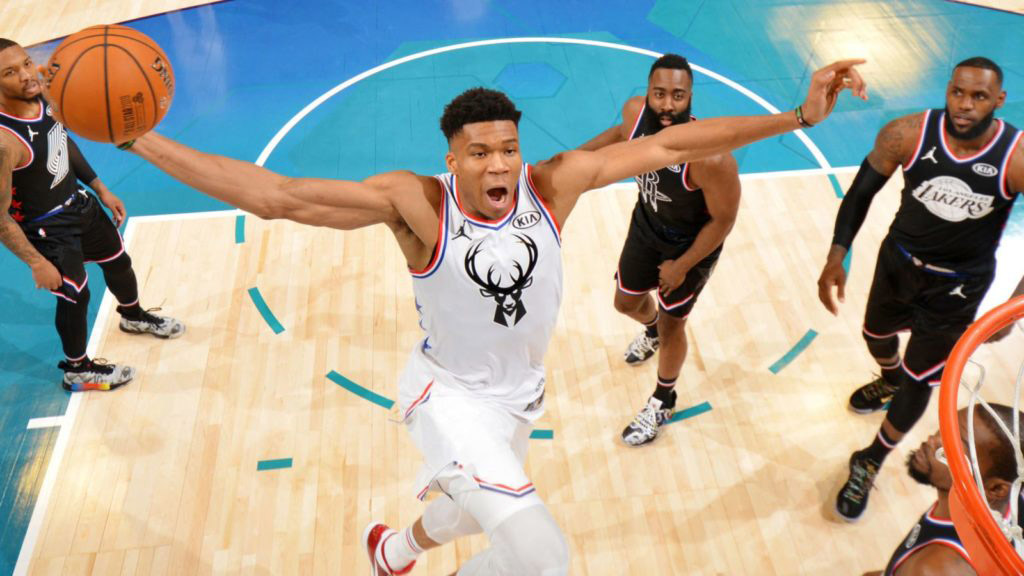 Giannis Antetokounmpo Is The Biggest Buck Since Kareem Abdul-Jabbar

“I love everything about you” (find someone who tells you that), King James told Giannis Antetokounmpo after his ‘Team LeBron’ won their 2019 All Star Game in Charlotte, North Carolina this weekend.

We love everything about him too.

I mean did you see that Air Greece dunk from the Greek Freak off the Steph Curry streetball circus bounce pass off the hardwood, that is the new off the glass Showtime assist?

This steer is soaring higher than the most points of all-time place of a sky-hook. Simply put, Giannis Antetokounmpo is the biggest Buck out of Milwaukee, Wisconsin since Kareem was called Lew. And yes with all due respect we haven’t forgot about the original big-three of Ray Allen, Sam Cassell and big dog Glenn Robinson lost in the unanswerable (even for the inspiration of Iverson) days of Shaq and Kobe, like all those 90’s Knick, Jazz and Sonics teams in the age of Jordan’s Chicago era.

The Bucks have had Oscar winners who held triple-double records like Robertson for what seemed like a century, until the Thunder of Russell Westbrook dynamite exploded them all. They’ve had dual point backcourts of Cassell and Gary Payton talking that talk, before walking the dribbling walk of small-ball was even a Steph Curry splash in Golden State thing. And let’s not forget about the Vin Baker, Michael Redd, or Brandon Jennings days. Or this year’s Hall Of Fame finalist Sidney Moncrief if you want to talk about big Bucks. Over the last couple of seasons they’ve had could have been superstars come and go too like Jabari Parker, O.J. Mayo, Michael Carter-Williams, Thon Maker and now Eric Bledsoe. They’ve even had G-Leaguers become All Stars this very weekend in Khris Middleton. But nothing is as bright. Nothing is quite like this.

Although not on the level of the Celtics or Lakers. Or even the Sixers or Bulls. Or modern day Spurs and Warriors. The Bucks are still however a storied franchise in the sense they are winners (hello New York). Classic champions in this Hall of Fame. Not to mention that with Oscar and Kareem they have two of the best players of all time, top ten and five. And now with one third of the biggest three players in the league right now that still could reach that ceiling all-time, they have a chance to add to their history book for the record. This is Giannis’ generation. We’re just witness to watching back and forth as this Buck runs the block like a big game James gazelle, leaving defenders Harden grazing.

We said this before the King came to the Hollywood show, even as Laker fans who love LeBron like Lucy. And it’s still true to this day. If we were to start a team today with one franchise player. We’d go with Giannis as our pick. Every time.

Like a Laker fan millennial whose favourite player should have been Kobe, but needed to talk about Kevin, Giannis is ours today. Like Garnett in his day the Bucks could just clone this guy if they concentrated on the science five times over. Because like the nicknamed alphabet covers almost all the letters, Antetokounmpo can play every position, point to seven feet. Who needs a Sixth Man? It’s no wonder this All Star in Charlotte had a team picked by Giannis playing all the King’s men. But we’re still ‘Team Steph’ too. He’s still one of the greatest players in the league, if not the best like he is in Durant’s Golden State. And what a man of God, professional idol and role model he is. Having fun in his native N.C. this A.S. weekend. From the three point line no contest, to purely playing point with a White Chocolate, Jason Williams twist behind the back. And just check how funny his press conference challenge was from Late Night host Jimmy Fallon, sneaking three weird phrases into his interviews twice. Wham. Bam. Can of ham.

But this is Giannis’ article. His moment. And oh how he is owning it. Like this rebranded cream and green franchise with the best Nike uniforms in the association (especially in the Earned City) and the best player on the planet wearing them. Worth a million Bucks this guy isn’t just bringing business to town and money to Milwaukee. He is the franchise. He is the city. Like he is his country. They say in this state you should fear the deer, but look behind the antlers and you can see what you should really be scared of in itself.

And he’s smiling too like Magic. Well, all born entertainers always do. Even if their instinct is killer in disguise. Now isn’t that the consumate professional you want to come to your pro-ball club?

But word from the Good Land, Cream City sitting uptop the Eastern Conference is their number one ain’t going nowhere.