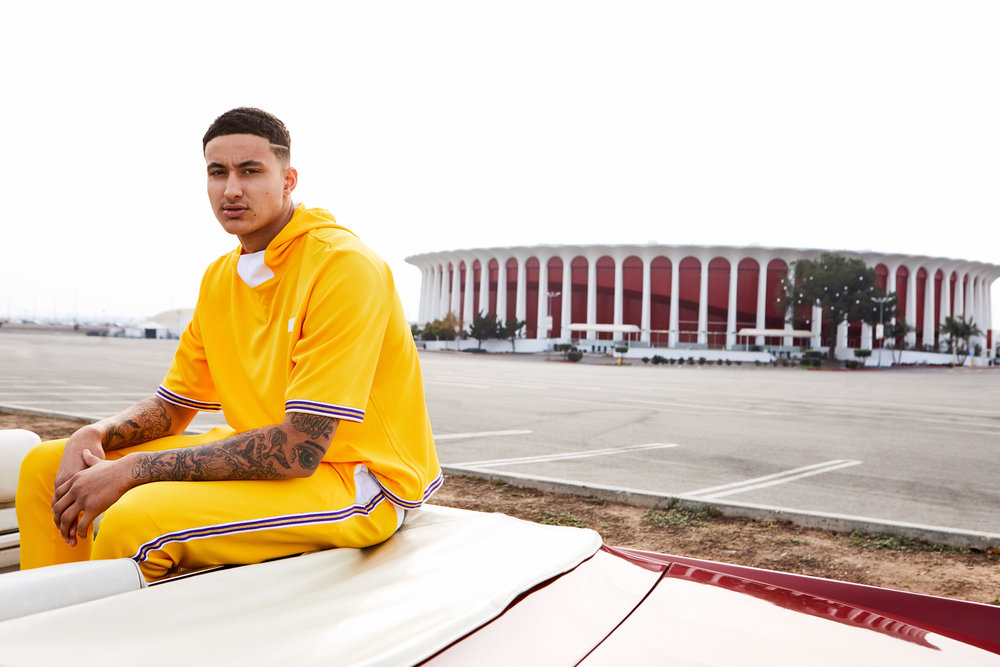 Holding the leather Spalding up in the air like it was the Larry O’Brien trophy, a game before the Los Angeles Lakers 2017/2018 season would officially end before the playoff campaign. Head coach Luke Walton, suit-jacket off and relaxed asks Andre Ingram how long he’s been playing in the D…excuse us, the G-League for. “10 years” the decade, 32 year old vet (who Brandon calls cuz, but isn’t actually a relation…although he’s now a Laker brother) replies after posting 19 exuberant points in his NBA debut. Just days before he would throw out the first, ceremonial baseball pitch at a L.A. Dodgers game. “Hell of an opening night man” coach says in kind as he shakes his hand, follows with an embrace and then hands him the game ball before ‘Dre’s day ends with a fingers to the sky team huddle of “together” on three.

That’s just the kind of season these young Lakers have had.

But how can yet another losing one bring so much joy, let alone hope?

Let’s write it out again…

That’s just the kind of season these young Lakers have had.

And if it leads to free agents like hometown hero Paul George signing. Or even the King, LeBron James in La La Land for his closing Hollywood career chapter on court. Then you couldn’t even script it better than Lavar wanting all the Ball boys on the floor at the same time. King James and King George.

And who knows who they’ll win in the lottery when the draft balls fall this Summer.

But even if all this becomes a bust the Lakers still have an incredible young core lead by Lonzo, Julius Randle, Brandon Ingram, Kyle Kuzma and many more late round steals like Ivica Zubac and this years class class of Josh Hart and the new Bryant, Thomas. Kobe who? All this after even losing Six Man stud Jordan Clarkson and slam show stopper Larry Nance Jr to Cleveland. But they did get still all superstar shooter Isaiah Thomas in return and maybe more to join vets like downtown big Brook Lopez, K.C.P. and the milk carton of Luol Deng.

Even some of their young, South Bay Lakers affiliates have come up big like Ingram. From son of the glove, Gary Payton II, to Alex Caruso ending the season starting at the point with Ball at the baseline sidelines. Even Travis Wear has gone from 10 days to shooting the contract three like Mike Penberthy.

Yet one of the biggest and most pleasant surprises of the season has been the Kuzmania (time to get your t-shirt) of the Kuzmanian devil, Kyle Kuzma. From a Nick Young jersey zero to one of the top ten Rookie of the Year heroes. From Summer League to preseason and now his regular one exit interview, K has had just as good if not better rookie year than his number two running mate with the second pick in the NBA draft.

And from bringing the Kareem sky-hook back to rocking the number nine Nick ‘The Quick’ Van Exel Champion jersey pregame, the kid is a throwback like the Clarkson fashion taking over chinchilla coat he rocks as he walks into STAPLES. But now Kuz wants to take that old school trend setting to Inglewood, like when he drove a burgundy 70’s Cadillac DeVille to an iconic parking lot for a recent feature shoot for SLAM magazine.

Kyle thinks the Lakers should play a game in the hallowed halls of The Forum next season.

And as much as we like the lights out downtown future of STAPLES (or as much as T-Mac warned him about the vintage facilities on ESPN’s The Jump) we couldn’t agree more for a league that loves to pay homage to their hardwood classic history like Mitchell and Ness.

Joining the Forum club again like when Magic and Cap made the 80’s Lakers ‘Showtime’ and put the Hollywood in basketball would be a nostalgia trip, especially for the clubs President. It would make a nice 20 year plus comeback (save 2009) after new millennium rival San Antonio swept them right out the stadium in ’97. This is the Lakers Boston Garden. Their Spectrum. Their court coliseum. And those marble pillars over red still stand strong like the statues of the greats from Chick to Elgin outside STAPLES.

Must Read:
Reggie Miller congratulates James Harden in passing him to become third in all-time threes

Besides ‘Bron and P.G. would love it.

Time to get those baby blue MPLS jerseys ready.

And don’t forget about ‘Dre.

In this article:Featured, Kyle Kuzma, Los Angeles Lakers, The Forum