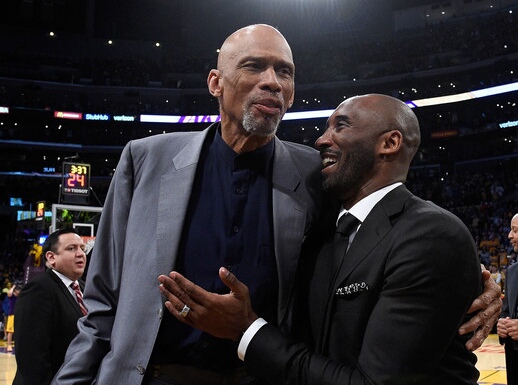 According to his book, when Bryant was a boy and his Jellybean dad was playing for San Diego, Abdul-Jabbar held the kid above his head like a lion cub. King of Hollywood. When it comes to Laker legends none come much bigger (apart from Shaq or Wilt…quite literally) than the 2K’s of Kobe and Kareem.

Number 8 or 24 up there may just be the greatest Laker of all-time. As 24 tried to get one over Jordan as the greatest player to ever lace up Nike’s in the NBA. He even went for 81 in a game. Second only in history to Chamberlain’s century. But when it came to all-time points made. He came third to two other NBA legends to don Lakers purple for gold. Mailman Karl Malone (got to love the Air Gordon hand behind the head, relaxed alley-oop tribute that was true Magic). And of course Kareem Abdul-Jabbar and that unstoppable sky-hook, line and sinker.

Both legends have not really retired however ever since the day they said goodbye to the game. Those competitive flames of passion never really ebb. Kobe in typical Mamba fashion has already won an actual Academy Award. Taking the Oscar for his ‘Dear Basketball’ animated short based on his Players Tribune retirement announcement piece. And in trading the rock for his Granity production company, he’s certainly in the right place to make his Hollywood dreams come true and continue his Los Angeles times story.

Kareem on the other hand has molded himself into a wonderful writer from the practice of his study. Speaking on social injustices with his protest prose and the ways of the world. As a matter of fact, from amazing autobiographies to articles for ‘Time’ magazine. Not to mention children’s books and analysis on the game, Abdul-Jabbar’s penmanship has become arguably as profound and important as his incredibly influential and inspired playing career. Could the man who has scored more points than any other player in NBA history actually even be a better writer than he was a ballplayer with the points he makes in a different book of history? As a matter of fact this year the Hollywood Reporter and Guardian newspaper regular contributed has been considered for a Grammy for his ‘Becoming Kareem’ audiobook. Which this writer along with his ‘Coach Wooden and Me’ moving memoir narrated by number 33 himself kept in Kindle company this summer on a solo trip in the Far East from Hong Kong to Tokyo, morning to night. Thanks ‘Cap. I needed that.

So it’s only fitting that just in time for Christmas (yep…believe it. It’s coming like Winter), you may find two new books from these two titans clashing in a different way (the New York Times Bestseller way) under your tree or on your bookshelf this season. Showing these two still ball even though they are far from purple and gold this year. Take it as read.

Kobe’s new book of Andrew Bernstein beautiful photography really takes you into his ‘Mamba Mentality’. What was once a Twitter trend has now turned into a bookend. As this coffee table book that reads like Michael Jordan’s ‘Driven From Within’ photo essay volume is set to reheat the table you place your feet and leave everything else on there decaf. As a matter of fact this short but to the poignant point read may just be the most inspiring book of basketball since late, tragic great analyst Stuart Scott’s ‘Everyday I Fight’ declaration.

The X and O to life Mamba motto analysis really taps into what this game and world is all about. It’s more than tidbits. It’s testament. And a new way of thinking. Guided by a competitive killer with an assassin’s eye for details. This is a man who watched nature documentaries to see how cheetahs moved their tale as they lunged at their prey so he could incorporate it into his jump shot when he took off from his legs. The same man who took up tap dancing like Fred Astaire to improve his footwork that he’d already picked apart by tearing up the old basketball wives tale that high-top sneakers where the way to go. Truly changing the kicks game like the number 23 before him. God is actually in the nuanced details here for something as necessarily rich and detailed to those passionate on honing their craft. Like anime animators, video game ones. Movie directors who are truly dynamic. Or songwriters who really see those twelve notes for what they really are or could be. Everything creative in this life, from business to commerce, culture and the fashioned designed sketches like a dance starts with a paper and pen.

Must Read:
Roland Lazenby's 'Showboat' Biography On Kobe Bryant Is A Great Show And Tell All

Want to know the real secret? Read all about it.

Kobe also gives it up in short testimonial great detail to the legends who have inspired his life to this day, like he does his teammates and breaking down his opponents. Muhammed Ali, Magic Johnson. And of course Kareem Abdul-Jabbar. The captain who is adding to the vast volumes of his own bookshelves by piloting a new Sherlock Holmes novel. Yep…that’s right. Two years after his ‘Mycroft Holmes’ debut with dynamic duo, magic partner Anna Waterhouse, Jabbar puts the deerstalker back on and puts his subject back under the microscope for another trip to Baker Street like Gerry Rafferty. And this time Mycroft is joined by his more famous, but here much younger sibling for ‘Mycroft and Sherlock’. A stellar sophomore story no slump that really gets into the mind and madness of the world’s most famous sleuth of a detective. All whilst adding to his big brothers own growing narrative legend, Kareem legacy retold in 2015. Taking it all the way back to the foggy, muddy, horse and carriage streets of 1886 London, the Evening Strand would be proud to print this.

Kareem and Waterhouse really tap into that Arthur Conan Doyle mythology. And as you read into this it feels in texture and aesthetic as real and raw as the Sherlock stories back then. Making it more than an accomplished accompaniment to the modern Holmes tales told. From the Benedict Cumberbatch, BBC ‘Sherlock’ series set in a modern day Big Smoke. To the more traditional movies with the Iron Man to Benedict’s Doctor Strange, Robert Downey Jr. (what a pleasure and marvel it was to see them go at it this avenging year in ‘Infinity War’). And let’s not forget the hidden gem that is the inspired ‘Holmes In Kyoto’ Japanese anime incarnation. But from studies in pink to hounds of Baskerville, this Basketball legend has found a home with Holmes. Elementary.

So my dear, Kobe or Kareem? It doesn’t matter which legend your history book chooses, which book should you read this fall for the record? Well just in like trying to pick which player on the biggest stage was better. The hook of Showtime, or the changing of the guard, we have a better idea for you…