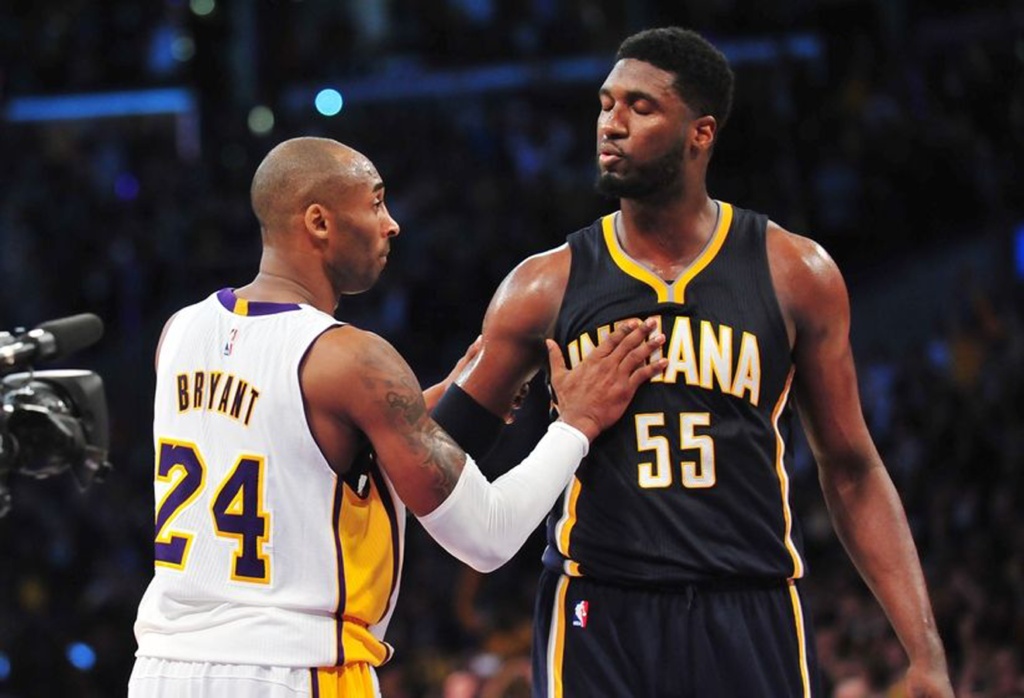 Lakers Change Their Pace As Roy Hibbert Joins The Show

Much talk during this Summers hot NBA free agency has surrounded the Los Angeles Lakers. Yet it has been much ado about nothing for one of the most storied NBA franchises.

After years of saying no, the Lakers finally have had to get over the fact that Kevin Love will not be returning to California, as the former UCLA grad has re-signed his declaration to stay with the Cleveland Cavaliers. Whilst two meetings with top free agent LaMarcus Aldridge couldn’t “woo” the “unimpressed” star, who has now signed with Tim Duncan’s San Antonio Spurs like it was all meant to be in the next chapter of his career legacy that could be even more legendary for the former Trailblazer.

An “underwhelmed” DeAndre Jordan left the Los Angeles too, but not across the STAPLES corridor from the Clippers to the Lakers, but across state to the Dallas Mavericks of Texas. Leaving the Lakers-who where so confident that they’d land a big man this Summer second season, that they drafted young, small-ball guard D’Angelo Russell over Duke 7-footer Jahil Okafor-missing out on even the likes of Greg Monroe or the Lopez twins.

And let’s not even get started on the Gasol brothers.

The Lakers even missed out on other player positions in this years open market, including an interested but restricted Jimmy Butler who re-upped and refilled his Buckets with the Bulls. Whilst Kobe’s breakfast buddy Rajon Rondo ended up signing up with the Sacramento Kings and probably won’t swap purple for purple even if the Lakers end up looking to trade for Californian King DeMarcus Cousins.

The Lakers have enough problems with their own free agents, losing talented, young big-man Ed Davis to the Portland Trail Blazers they thought they’d be able to poach Aldridge from. While veteran former All-Star Carlos Boozer’s (who got into it with who’s about to come, fighting last season for what we hope is water under the hardwood) future is as up in the air as talented, hustling big Jordan Hill’s.

Must Read:
New Lakers Keep Rising Against The Phoenix Suns

Leaving the Lakers with only the raw Tarik Black and enthusiastic Robert Sacre on their post playing, paint books next to multi-faceted forwards Wesley Johnson and Ryan Kelly. The Lakers may need to bolster their splinter-thin bench by retaining guys like Jeremy Lin, Wayne Ellington and Ronnie Price with their remaining cap costs to join swag Sixth Man, hot scorer Nick Young too.

Still the lost-Lakers who have had an even worse free agency period than last Summer’s LeBron and Carmelo stakes and are surely looking forward to next years lottery and Kevin Durant sweeps-had a great draft and future as their pick Russell and last years rookies Julius Randle and Jordan Clarkson make for a scorching Summer league team with rough-housing Jabari Brown.

Whilst the franchises young big-three of the future will make for a great starting five with the legend Kobe and the Lakers new pick-up. As they couldn’t pick up anything for free on the open market, L.A. where quick to trade up with the Indiana Pacers for talented shot-blocking center Roy Hibbert. Who at 7 foot 2 is definitely one of the biggest men you can get in the league…literally (hows that for responding to getting no F.A.’s?), albeit one coming off a poor performing season.

Kind of an acquisition that would have been more amazing two calender’s back. Still, the former All-Star and Georgetown Hoya, following in the painted sneaker steps of the likes of Ewing, Mourning and Mutombo, who along with All-Stars Paul George, George Hill, David West and Lane Stephenson gave the Indiana Pacers one hell of a starting five in their 2013 Cinderella run, now completes the Lakers first-unit.

And the Lakers only had to give up a few second round draft picks and the rights to an overseas player (lets hope it’s not the next Marc Gasol) to get the new anchor of their starting five who was once backed up by former Laker bust Andrew Bynum (lets hope Hibbert doesn’t follow former booming suit for what on dry erase once looked like a great center rotation).

The 28 year old has plenty of years left in the tank and on D you couldn’t go fish for much better in player pools. Yet before this guy turns 30 he needs to improve his erratic offensive game and poor rebounding for a player of his size. Especially if he looks to take the future and his young post partner Julius Randle under his inside-game wing.

Going from a Hoya to a Pacer and now a Laker, coming off last seasons averages of 10.6 points, 7.1 rebounds and 1.6 blocks and swapping Pacer yellow for Lakers yellow will Dr. Hibbert be the post prescription the Lakers ordered? Or will he leave everyone laughing?

With Roy and a potential R.O.Y. the Lakers have as much to think as they have to look forward to. But this won’t end with next Summer and another Kevin that needs to be talked about. If the soon to be Kobe-less Lakers want to get better, they need to do this right now! And with the first big deal of many more, the Lakers can’t trade this notion. Time for them to make more big plays to paint their future in purple and a gold that gleams instead of glitters.