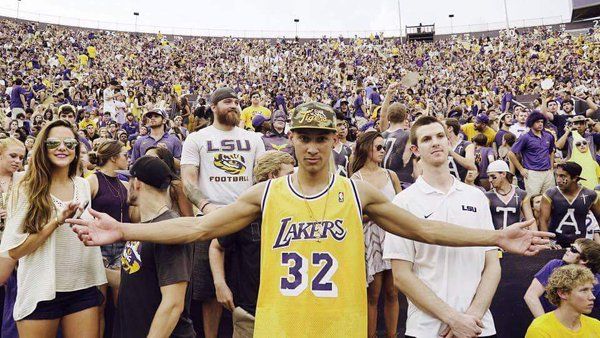 Lakers Must Live With A ‘Death Lineup’ For Life Without Kobe

Someone relay it over the walkie talkies to the STAPLES Centre attendants because the only way your seeing number 24 (or 8…or both) in this arena again is if you look up to the rafters where he helpt put up all those banners.

2016 has been an unbelievably bittersweet year. We’ve said goodbye to too many people we never wanted to see go. From the personal to the public. The greatest champ Muhammed Ali took his last bow out the ring this month. And the man we thought could never die took a tragic turn not long ago too as we lost musics Prince.

Now whilst not as tragic as those dearly departed who now rest pecaefully, L.A. also lost it’s king as we gave a fond farewell to maybe the greatest Laker to ever wear purple and gold.

But as Kobe Bryant walks away from this game and the Laker legacy of Mikan, Wilt, West, Elgin, Magic, Kareem and Shaq that he kept running we must give the floor to the next generation to bleed purple and live gold.

Because for every Kobe, there’s still Magic. Like for every Gail Goodrich there’s a Pau Gasol. And every James Worthy, a Lamar Odom. The Lakers have a future. A life A.M. (‘After Mamba’). They woke it up the year they drafted Julius Randle out of the winning pedigree of Kentucky. Even if a first game broken leg debut put his potential to sleep for a year. Just look at him now.

Or the ‘other’ rookie of that campaign, the sleeper pick Jordan Clarkson who is now alarm clocking his time within the 48 minutes on the floor. Or the rooks the Lakers drafted last year in response to another lost year. The new late round steal in the dunking son of Larry Nance Jr. Who at teammate rivalry inducing first looked to replace Randle but now is going forward with and working in terrific tandem alongside him.

And then there’s D’Angelo.

The man that Clarkson shares his backcourt with. The number 2 pick of last years draft who is the future of this franchise. Under Kobe’s curtain call wing, D’Angelo Russell is now ready to lead the charge for the shot clock in the wake of the buzzer of number 24. But if this kid who can pass as well as he can score (just like Bry…ah wait) doesn’t become a marquee player, the franchise that has boasted so many legends that one is the logo needs the next great of this league.

Another lottery win for the number 2 draft selection in this Summers pick of the new school litter could be it if the Lakers pick wisely. We all know who they want…the feelings more than mutual. But all bets are on the number one Philadelphia 76ers giving a draft cap to Ben Simmons for the next chapter in his book of basketball. But if they’re off then the young stud whose already been dubbed the “next LeBron” so much basketball bible SLAM magazine have already given this young prince a throwback tribute cover to the King could hit gold. It makes storybook end and new beginning sense. Not only is he next Laker leader D’Angelo Russell’s former high school teammate, from Montverde to LSU he’s also worn purple and gold his whole life. Why stop now? Forget M.J. You see him in the vintage Earvin Johnson Mitchell and Ness. Whether trick or trade…it’s time for some magic!

Still if they can’t pull a rabbit out the hat then maybe they should just throw some of that Hollywood money at free agency. Sure over these last few LeBron and Carmelo years the last time the Lake Show had any luck with this sales pitch season was when they got Dwight Howard to sign a contract in pencil…and we all know how that turned out! Still the big ticket this year is Oklahoma City Thunder’s Kevin Durant and if L.A. want to shine their bright lights at the most explosive, versatile forward franchise face they’ve coveted since Kevin Garnett and take the first step towards bringing U.C.L.A grad Russell Westbrook back to his California alumnus next year then they need to beat the Celtics again and everyone else for this storied franchises script rewrite.

Whether the Lakers talk is about Kevin or another star power that fits the bill it’s time for the franchise known for the biggest players-from the Goliath Wilt to the fellow Stilt Shaq of massive dominance-to go small. It is after all a revolution. You see it televised in the league. Tune in tonight as the Curry cooked Golden State Warriors look to knock the King off his throne once and for all. And if they unleash their ‘Death Lineup’ of back from suspension Draymond Green, the ever underrated star Harrison Barnes, last years Final MVP Andre Igudola and the Splash Brothers of Klay Thompson and Steph Curry then its R.I.P. King heads will roll in this Game Of Thrones and someone else will have the crown firmly upon their Ceasar.

Must Read:
It's A Hard Knick Life For N.Y.

Time for the Lakers to run suicides too…and we aren’t just talking about for practice.

Backed by a bench full of swagger from Nick Young’s streak to Lou Williams clutch this first five is almost alive. Julius Randle has already garnered Dray Green comparsions-even from the money man himself-as early as last preseason. So he’s your meat in the middle of this forward and guard sandwhich. And you know whose running point and shooting the lightouts. And the dynamic duo of D’Angelo and Jordan has also ruled even the Dubs in one of the moral victories of a season of change were they lost more than Kobe. And flanking the forward slots Nance Jr.’s school kid making, contest worthy dunks will put everyone in their place and be the perfect compliment to the victory led by the man yet to fill the last spot on this fantastic four that are about to make a formidable five.

‘Death’ is about to become the Lakers…it almost sounds like a dynasty.