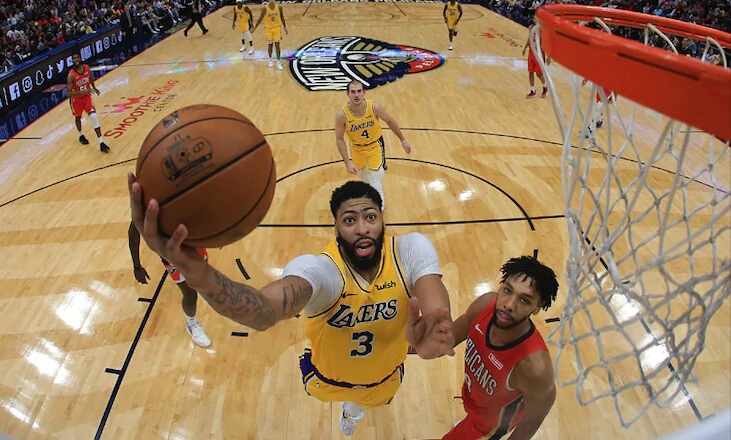 That’s how Boston banners air-quotes, greeted Irving on his return to Beantown with the New Jersey Nets along with chants of, “where’s Kyrie”, as the injured superstar watched his new Nets team fall 121-110 to the Celtics in the TD Garden.

“BOO! HISS!” in a devilishly delightful double-header the NBA cooked up this Thanksgiving feast, parading like the floats of Macy’s so this day wouldn’t turn out a turkey, the Lakers also had a Mardi Gras in New Orleans…and if you don’t know that story where have you been over the last year? 365 days ago Anthony Davis let the Big Easy know it was an N.O. that he was going to re-sign with them once he became a free agent this Summer (the Chicago born legend may not even re-up with the Lakers). So it was better to trade him before they lost everything.

But negotiations with the Lakers lasted longer than a hostage one and finally today with the best record and the two best players in the league, the Lakers and A.D. were greeted with so much buzzing from the stands you would have thought the Pelicans were still their old Hornets namesake (now back in Charlotte), or at least trying to promote this very website.

“I don’t want no smoke”, Davis told his old Pelicans locker room, before going out and giving them exactly that with a fired up a Glen Rice (remember when Shaq and Kobe tried him, J.R. Rider and Mitch Richmond as their dynamic duo big-three finisher before playing fantasy Basketball with the glove and mailman of Gary Payton and Karl Malone? Well finally the one, two of ‘Bron and the Brow have one in the late flurry of threes from Kyle Kuzma…the one part of the young core the Lake Show refused to trade to the Pels), 41 points, 9 rebounds and 3 steals. Smoking them out.

Must Read:
Your Number Is No Longer Up With NBA's New Jersey Of The Future

Another big game for the big man, still nursing that big shoulder injury (you want to talk about “Load Management” now…this guy deserves a rest), leaving the game after colliding with a guy he was traded for Josh Hart, for longer than most fans at halftime who won’t return to their seats because there’s a queue of all the other empty ones waiting for hot dogs and nachos. But today A.D. had the extra dip.

But this revenge reunion for both sides wasn’t just about one of two players. The Pelicans had a haul of folks going against the Lakers like the disgruntled young core of D’Angelo Russell, Julius Randle, Larry Nance Jr, Jordan Clarkson, Ivica Zubac and more proving Magic Johnson (who gave up his job over all this) and Rob Pelinka. They have that in their own big-three of Brandon Ingram, Josh Hart and Lonzo Ball…and even though Ball is out with Williamson. One day and one day sooner than we all think the Pelicans have a young team who could fly past even this new Showtime of the best in show and league leading Lakers looking for their ninth straight 16 and 2. A Lakers team that also has more former Pelicans than Davis in the point of Rondo (alleying so many oops to Ant’s hoops)and injured big DeMarcus Cousins (who once formed a twin tower future in New Orleans with Davis…now just wait until he comes back).

Despite all the boo’s that wouldn’t set in Crescent City, this is a big man who was big enough to tell New Orleans he wasn’t coming back way in free agency advance so they could get something for him in return (and get something, oh they did). That’s something he won’t even have the time to do with the Lakers if the Windy City changes his Hollywood direction next season. Jrue Holiday who had 29 points and 12 assists knows this. Passing his jersey in respect to his old friend for a Wade swap postgame in this one after their last dance as a band of brothers. The King, James had 29 points and 11 assists himself (making milestone after milestone this season, this game becoming the fourth player in NBA history (and Kobe, Kareem and Karl Malone it’s all former Lakers) to surpass 33,000 career points) as Big Game Kuzbis without the goggles (but getting one in the the eye again) added a sweet 16 like that iconic birthday. Whilst former Laker Brandon Ingram saying there was nothing but love for his organization pregame, showed his old team what they were missing with his day, coming out and of age with a double/double of 23 and 10.

Hart’s hustle. The ingrained game of Ingram. J.R. shooting with the clutch chronicles of Redick. Holiday not taking a single play off on a career night where he looked like the Raptors Kyle Lowry wrapping it up in the finals. Even without Zion and Lonzo the Lakers former lead guard the Pelicans made their point.

Must Read:
Kyrie Is All About Family

That was until Davis gunning for Defensive Player of the Year again with every buzzer beating block after dunking and free throwing his way to the lead, amongst all the jeers picked the pockets of the Pelicans with a key steal at the horn which blared a 114-110 win for the Lake Show. One that goes on beating teams they are as many as 14-zip down to (4-0) like they are wearing them down and playing chess with all these checkers.