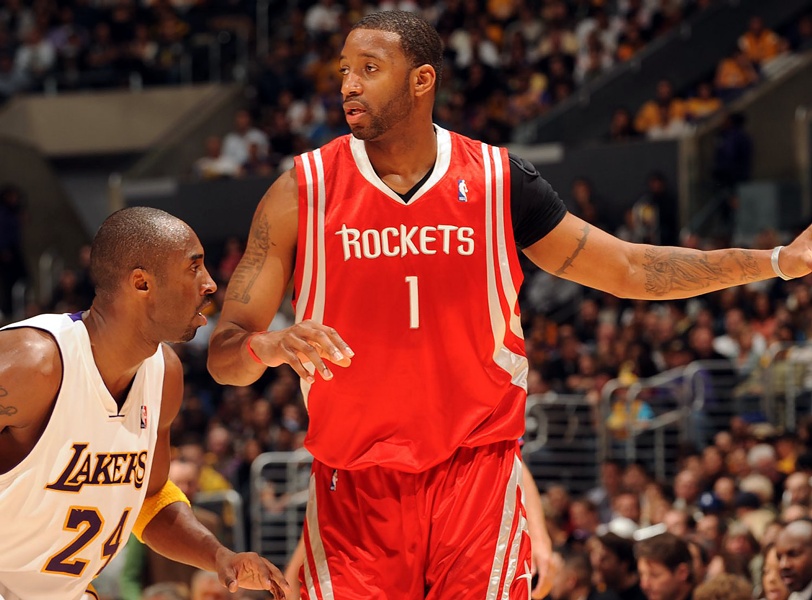 The return of the MAC? Tracy McGrady works out with Kobe Bryant

Stare into the eyes of the big sleep. It looks like he wants to wake up his NBA career.

After trying his throwing arm in minor league baseball and making a decent swing at it like Mike, it seems like Tracy McGrady wants his own personal Jordan moment of returning to his sport first love.

The closer he gets who better to work out with then the leagues greatest competitor since M.J. and still one of the best today shaping up his own round ball return?

Those fans who think this Reggie Miller like desire to step back out of retirement is even more ludicrous than his base rounding should realize he made it there and could make it back in his true, million pound bread and butter profession. As he fields all sorts of criticism just remember who he’s training with, his fellow 35 club Kobe and once his peer a man who takes no messing around, with this time or the game he so Achilles sorely loves. Once when Kobe Bryant agreed to meet young stud O.J. Mayo at 3 for a clinic, Mayo was left waiting like salad dressing all afternoon for Kobe. When O.J. called Bryant, Mamba told him that he wasn’t late…Mayo was! As he was waiting for him, at 3am in the early hours of the previous morning.

Expect some day and night from the guy who doesn’t look like he gets much rest as he looks back fondly on the days where he was the numerical definition of the back of his jersey. Sure he wont be throwing slam dunk winning assists to cousin and former fellow Toronto Raptors star Vince Carter, let alone alley oops off the glass to himself, but the window is not completely closed for a man who impressed with Detroit and should have got more LeBron useful mirroring burn for San Antonio’s losing finals series a year prior.

Still its only slightly ajar for a man whose Magic time or Rocket soaring past is behind him. Call it like you see it however but the man who formed perfect but puncuated partnerships with Grant Hill and Yao Ming but never truly left the first round is still one of the greatest, all-star players of all time. From his incredible work in Darfur to his time in the sticks you also cant knock his extra curricula work performed when injuries robbed him of his twilight years. One of our generations most entertaining should at least be open armed welcome back to a training camp or 10 day. Besides those nursing the hurt of what could have been in the T-Dot in what seems like a minute ago should know Tracy and his cousin love this game more than the hand in hand, ankle and knee injuries and critics think. Vince recentely telling SLAM magazine for their throwback issue that he’ll be looking to drop 30 in old men leagues when he retires.

The passion never dies. Its a family thing and a basketball brotherhood. After switch hitting, before the Hall for Tracy what’s wrong with one last home run?

In this article:Kobe Bryant, tracy mcgrady