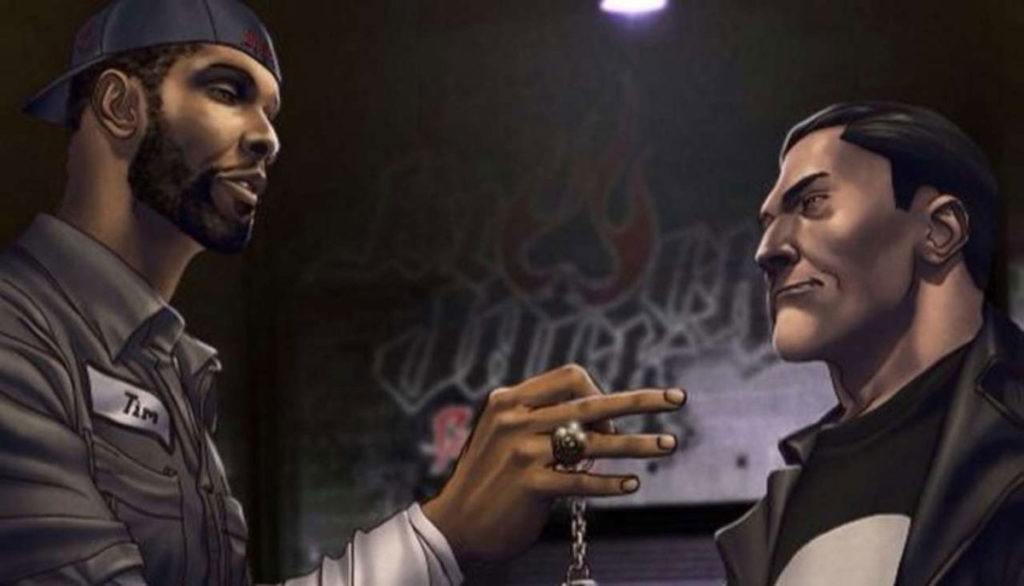 Brace yourself like Tim Duncan’s knee sleeve, because Basketball and comic books are about to come together in a superhero geek and hoop purists dream. It’s certainly one of this writers whose heroes include Michael Jordan and Captain America.

The San Antonio Spurs are the NBA world champions led by the superhuman robot Tim Duncan. While Marvel are easily the worlds best comic if not movie franchise (no offense Batman). Now after a year that saw Timmy fill his hand with rings and Stan Lee’s team having their best year ahead of the ‘Age Of Ultron’ at the movies (see ‘Captain America-The Winter Soldier’, ‘The Amazing Spider-Man 2’ ‘X-Men: Days Of Future Past’ and ‘Guardians Of The Galaxy’…no we mean REALLY see them), there’s more in a classic, crossover collabo.

From his knee support to choice of Halloween fancy dress (you remember when he and Tony Parker held guns to a Joey Crawford referee mimic…now that is scary), its clear to see that Tim Duncan is a fan of ‘The Punisher’, not just one to his opponents. Now following all his hoop dreams coming true Duncan will be immortalized in ink as he’ll appear on the cover and also the content story of a new Punisher comic coming soon. It’s time to dig out your black and white, slack jawed skull t-shirts, but will the gun-toting Punisher don a black and white Spurs jersey under that trademark leather jacket that Mickey Rourke’s character off Sin City would declare as, “one, mighty fine coat you got there”!?

From this teased picture one thing we can see is Tim Duncan looking somewhere between Joe Budden and someone off GTA…and you thought this guy boring. Getting his Counting Cars on and showcasing his BlackJack Auto shop, there’s more than meets the eye for a guy that is swapping sweat soaked uniform vests for engine grease overalls with his first name in circle. Providing the Punisher with the keys to some real, American muscle in a car that will actually be auctioned off in real life for charity, San Antonio’s Texan high draw has never looked cooler. Tim Duncan, car dealer, comic book star and NBA Champion. We told you this guy was a superhero.

Now Marvel at that!