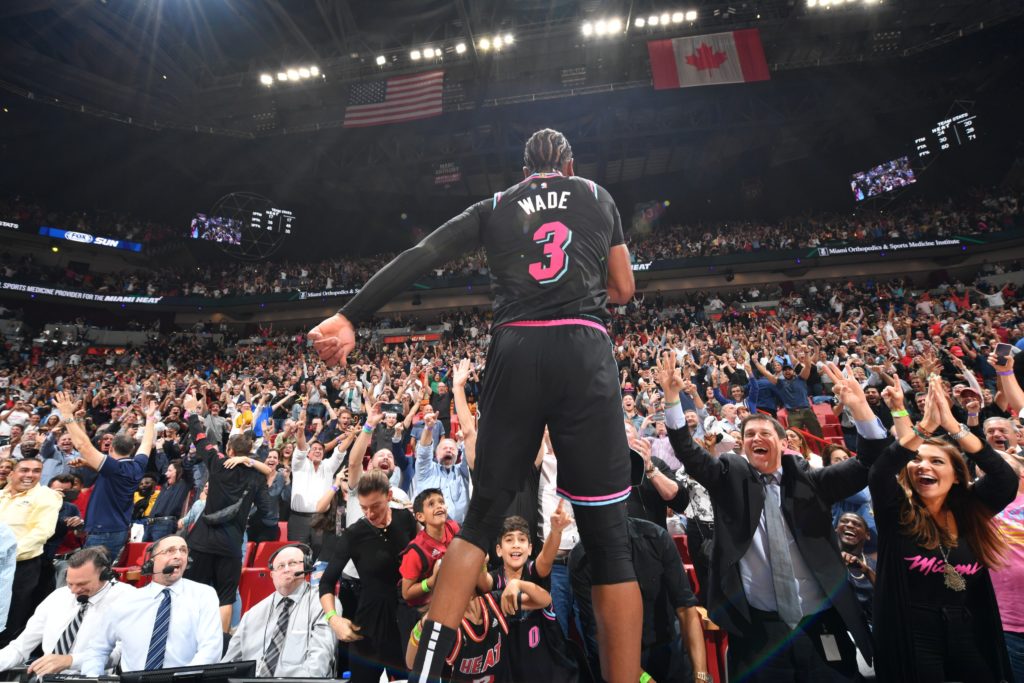 Wade Wins With One Last Splash Against The Warriors

“My game was a dance of gratitude.”-Dwyane Wade, ‘A Father First’.

With one last dance and one last step. One last splash and one last point to beat the champion Golden State Warriors. Wade made it his world once again. One last time in his Floridaland last night.

With the clock running down like his career one, Miami Heat all-time greatest legend and All-Star Dwyane Wade dished off to Waiters who waited for his opportunity to Jackie Moon it right back to D-Wade, who had screen set himself some space to find a whole new open condominium spot downtown. As Dion dimed back the ‘L3gend’ whose number will soon be in the same rafters he shot for faked for what seemed like longer than those three dots on messenger when you’re waiting for a reply that began with, “we need to talk”, although it was only less than a mere second. And theeeeen with every Warrior throwing themselves at this South Beach superhero he couldn’t get a shot off as the commentator cried in unison. Regaining control of the ball after briefly, heartbreakingly losing it on the tips of his fingers, Wade was reaching Derek Fisher territory on the game clock. So like new Laker Point Rondo against his old Boston town, this guard instantly threw it up like it miracle of physics bounced off his hands, before it banked off the backboard and beat the buzzer like Kobe against the Heat back in the day, exactly ten years ago. And after Dwyane Wade ran away from his mobbing teammates like road teams do after doing this back to the locker room, who looked like they were trying to fight him with bear hugs and daps. He leapt on the scorers table and pounded the City Edition pink and blue neon on black logo of his Nike jersey to the AA, Miami crowd like Kobe. Before postgame thanking the Black Mamba for that decade ago, aged mentality.

But even Bryant never had it this defiant as the fine wine of Vino’s last measure was pouring away.

Must Read:
Could Tyson Chandler BE Anymore Of A Frontcourt Knockout For The Lakers?

It must be the Iverson cornrows for the hottest guard in a flash since the answer, no question.

Every night this rocking chair, retirement tour Wade has soccer swapped his iconic Heat jersey-autographed and dedicated-with the souvenir strip of his favourite player from his opponents postgame. And last night against the reigning, superteam champs he had his pick of the legendary litter. Steph Curry, Klay Thompson, Draymond Green, Klay Thompson, Kevin Durant and DeMarcus Cousins. But it could be argued that all these Hall of Famers wanted their own piece of one who is red carpet rolled and ready for his place in the corridor of classic athletes in this association once all this high praise amens. Especially after Dwyane waded through the water of the Splash Brothers for the last drip of the timer that was all wet.

But tonight this Most Valuable jersey was worth keeping himself.

Flash off the glass, hows this for a flashback? Just think today marks a year ago that Wade taking his talents back to South Beach, homecoming hit another big, game winning shot in the all-white version of the City Edition, Miami Vice jerseys. Dedicating that shot and his shoes to Parkland victim Joaquin Oliver a week after his tragic death. For the family.

Basketball doesn’t get much more beautiful than this and legends don’t come much bigger than D.

And when it comes to this champion saving his best for one last dance. This may be one of his biggest moments in a year, let alone a lifetime career of them. Season after season.

Like fellow dynamite dynamo little man Isaiah Thomas of the Nuggets tweeted, “does Dwyane Wade have to retire?”

Must Read:
City To City. Worst To First

I mean really does he?

Because soon all this will be over in a flash and barring the playoff picture of the ultimate Cinderella story we don’t want this carriage to turn into a pumpkin just yet if there really is any time left on that clock.

Let us pray. As after last night’s off the pine prime of 25 points, 7 rebounds, 3 assists, 2 blocks, 1 steal and one Hail Mary prayer answered that was all she wrote.

But in this swan song symphony by the numbers that almost seems scripted, we hope the Basketball God’s can bless us with one more note before the fat lady.

Because how sweet would that sound?