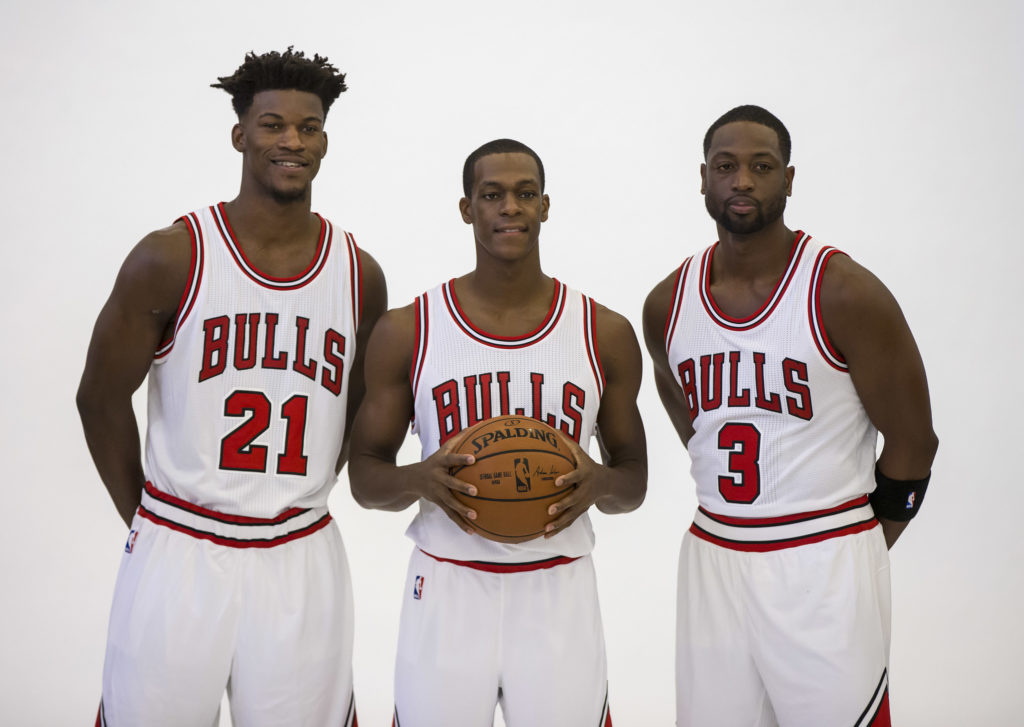 “It just doesn’t mean enough to guys round here to win”-Dwyane Wade.

“I want to play with guys that care”-Jimmy Butler.

“The young guys work. They show up. They don’t deserve blame. If anything is questionable it’s the leadership”-Rajon Rondo.

No bull, there’s more than a storm coming to the Windy City right now. There’s a tornado in Chicago. And it’s all swirling round the Bulls franchises big-three. And just when you though there was problems in The Land of the King. Shots fired (see above)? You’re damn right!

This shouldn’t be happening in the classic Michael Jordan Chi-town. All the losing. All the game playing off court were there is no winner. This is making Chi-city fans miss the days there Bulls were set in concrete every time Derrick Rose’s legs wilted. Not to mention what could have been with Jay Williams. Fred Hoiberg’s team should be better than this. Especially when they have big names like the buckets of new franchise leader Jimmy Butler, the Flash of hometown hero Dwyane Wade and the prototype point in Rajon Rondo. Not to mention big man Robin Lopez, rookie Denzel Valentine, valuable vet Taj Gibson, long range ball boy Doug McDermott, international known Nikola Mirotic and new star Michael Carter-Williams.

Still despite all this proven talent the Chicago Bulls can’t catch a break…or even a W. And now they’re only losing even more now they are just blaming it on each other. Maybe they should learn from the young, losing Lakers who are still together as a quote en quote team, even after last years leaked beef between sophomore leader D’Angelo Russell and Spark Plug Swag Man of The Year, Nick Young. These baby Bulls are older than all this. Yet the Flash Buckets of Butler and Wade are calling teammates out via press conference. Whilst Rajon Rondo is clapping back on lengthy Instagram posts featuring his vets from the Celtics days. The passive/aggressive back on forth is refreshing Twitter timelines until social media goes stale like your local Facebook feed. You haven’t seen behaviour like this since the last time a teenager ranted on Tumblr. And as it all comes falling down even the passion of Kevin Garnett is protesting that this should remain in the locker room. Like a coaches code of conduct.

Must Read:
Florida Orange Is The New Black For The Orlando Magic

Now the veteran and superstar leaders of number 21 Jimmy and Dwyane 3 may be trying to set an example, but this instill of discipline on the surface looks like a bad one. And with rumors that free agent Wade will be one and done this season at home and with the Bulls previously open to Carmelo-ing Butler who knows how long these guys will be in service of Chi-City. A raging Rajon at least has his young teammates back like a veteran leader should, even if he is willing to throw his twin tandem parts of his top trio under the team bus. But then again at least it’s in reply. Ever since leaving the storied Celtics and the chance to be the new Hondo, Rondo has been thrown from more teams than he throws passes. Even in his place in the Bull-pen was in jeopardy just weeks back after a couple of DNP-CD’s and now owners may put the owness on him. The Kobe Bryant dubbed “a##hole” has been known to have troubles in the past but he stresses he “may be a lot of things but (he) is not a bad teammate”. And it’s clear Chicago’s problems don’t just belong in the hands of their lead guard…he has a point too.

There’s too much talent here to waste for one of the best teams in the league…on dry erase at least. Time for the Bulls owners to stop this B.S. and grab this situation by the horns.