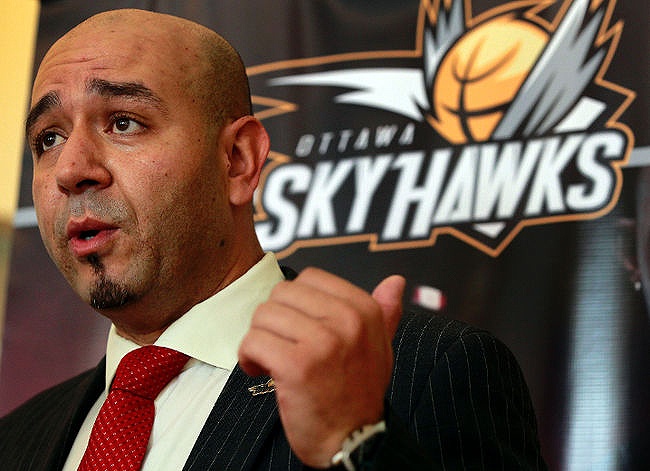 As we gear-up for another exciting season of NBLC (National Basketball League of Canada) basketball, the fourth in league’s history, it’s starting to look like the Ottawa Skyhawks will be latest addition to the NBLC morgue.

Rumors have begun circulating that the “Nations Capital” franchise will not return for it’s second season after completing a costly and somewhat successful but experimental inaugural season with a winning record of 21 wins and 20 losses, coming-up just short of the NBLC playoffs in heart-breaking fashion.

The Skyhawks were awarded a NBLC franchise in 2012 under the guidance and ownership of Gus Takkale and Bytown Sports Entertainment. The league built a strong case around why Ottawa was/is a great city and market for a semi-professional basketball team- which it is! Unfortunately, the lack of a true basketball facility in the city forced the team to have to play it’s first season in the massive and distant home of the Ottawa Senators which has capacity for over 20,500 plus patrons but is located roughly 30 minutes from the city’s growing and vibrant core.

In 20 home games the Skyhawks averaged just 1051 fans per contest, not even enough to fill-up the Canadian Tire Place once! Their last two home games were played at the nearby city college La Cite Collegiale which only has capacity for roughly 300-500 fans and violated the venue policy that the league has in place.

Attendance peaked at 3560 fans when the Skyhawks knocked off the Mississauga Power 100-89 to kick start a five game winning streak. The lowest points came when the team was forced to play in front of just a 153 fans against the London Lightning (Dec 4/2013) and 202 versus the Brampton A’s the following day.

The ownership group had been hopeful all along that it would be able to secure a deal with newly built TD Place, which would offer the Skyhawks a more suitable home both in terms of location and in line with the leagues mandate for a venue (6 000-10 000 fans).

At the conclusion of the 2013-14 season it was evident that the Skyhawks were already on life-support, and that a return for a second season was seriously in jeopardy, therefore making these early rumors more credible. Add to the fact that the 2014-15 season is less than 90 days away and there has been next to no activity from the team. No player signings, including no announcements as to were the team will play this upcoming season, if it eventually does return to the league.

Several of the players that made the Skyhawks an exciting and competitive team have found new homes overseas including second-leading scorer Justin Tubbs who will take his 17.4 points per game to Germany, hometown favorite Eric Kibi (4.4 PPG/4.7RPG) has also secured is future in the German nation.

Hopefully the ownership group, the city and the league can put together a plan to keep the Skyhawks breathing and avoid becoming the fourth franchise (Quebec Kebs, Montreal Jazz, Oshawa Power) in just four years from joining the National Basketball League of Canada morgue or relocation list.