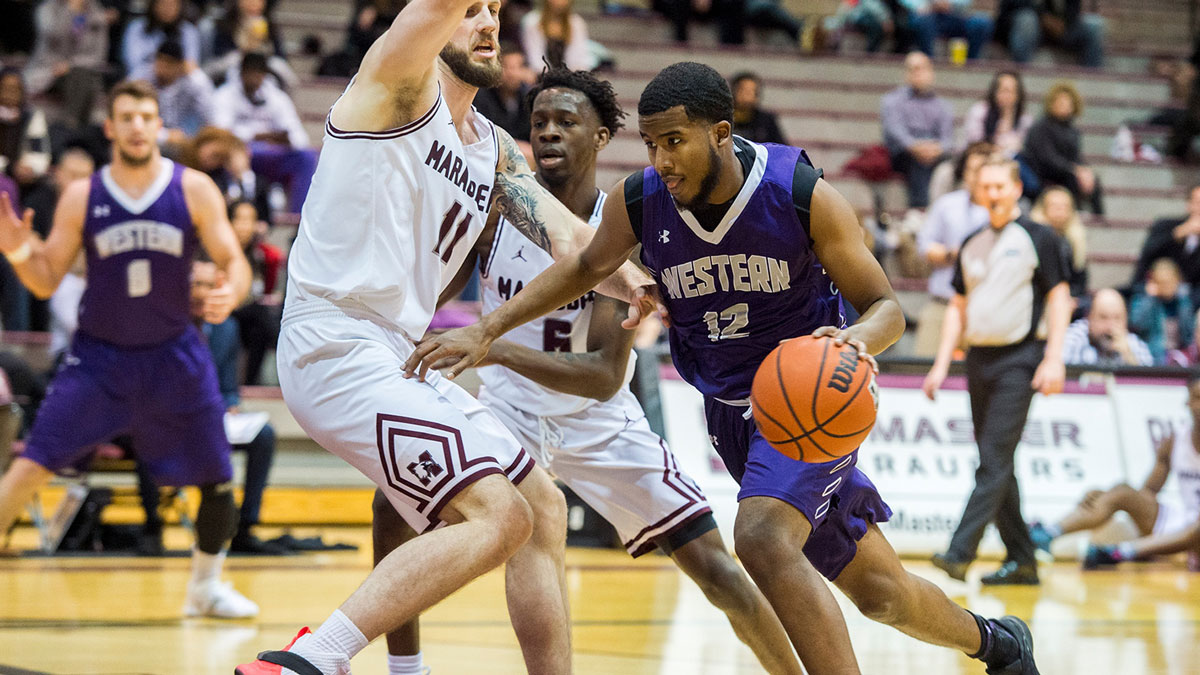 Omar Shiddo: Soft-spoken assassin driving to the basket against McMaster

It’s around 8:30 p.m. on a frigid Wednesday in the dead of winter, and Omar Shiddo is having one of his worst games of the season.

The fourth-year Western Mustangs guard, who has drawn comparisons to Damian Lillard for his clutch shooting, has just five points in the first half of a tight game against the Guelph Gryphons.

In the second half his game marginally improves, but there are a series of missteps — layups that don’t go down, jump shots that rim out and an occasional lack of motion without the ball.

Shiddo also gets hit with a technical foul after a physical bucket he felt should have resulted in an and-one, clapping back at two Guelph players who allegedly chirped at him during the play.

This is a far cry from the kinds of performance Shiddo is known for, and light years away from the 35-point outburst he had four days earlier in an 84-79 win over rival McMaster.

It doesn’t matter — not even remotely.

Western clamps down on defence in the second half and several teammates make big shots. Shiddo helps neutralize Guelph guard Malcolm Glanville, who had 11 first-half points and showed signs of catching fire.

Shiddo finishes with 12 points on 4-15 shooting, his second-lowest total of the year. Five other Mustang players players score in double-digits, including 27 points from sharp-shooting guard Eriq Jenkins.

Western pulls away and cruises to a 94-73 victory that’s as ugly as it is decisive.

“That’s a win, boys!” someone shouts emphatically as the team gathers for a post-game huddle in the cavernous, mostly-empty Alumni Hall in London, Ont. — Western’s home court.

“Guys on my team stepped up,” said Shiddo minutes later in an interview, his soft-spoken analysis tumbling out as quickly as he jukes opponents, like water over Niagara Falls.

“The second half was more of other guys doing their thing and me not having to do as much scoring, which I love to do. It’s all about team … we got a big win.”

Shiddo is unquestionably a leader — and on most nights, the most effective offensive weapon — on a Western team loaded with potential.

In his tenure, the Mustangs have been as good as they have been in a decade, with a legitimate chance to challenge for a berth in the U Sports Final 8 — Canada’s version of March Madness — in Ottawa.

“That’s our goal from the beginning of the year — trying to get to nationals,” said Shiddo, who grew up in Brampton, Ont., a hotbed that has produced several NBA players, including Cleveland Cavaliers forward Tristan Thompson and former No. 1 pick Anthony Bennett.

“We think we’re a top-five team in the country,” said Shiddo. “We’ve just need to continue to play like it.”

Western is ranked outside the Top 10 nationally, but has the second-best record in the Ontario University Athletics (OUA), four points behind the Carleton Ravens.

They’re also first in the OUA West division, with a roster that skews relatively young: Seven of the 12 players are freshmen or sophomores.

“A lot of stuff goes unnoticed on the stat sheet,” said Shiddo. “But we’ve got a full team and we’re 10 deep. Everybody plays their role. We’re not a team where it’s one guy.”

He’s right. This win over Guelph is proof enough of that. And yet in crunch time, Shiddo has a penchant for taking over games, Lillard-style, and making big shots.

It has become part of Western lore.

When Lillard puts a team on his back and wills it to victory in the fourth quarter, fans and media call it Dame Time. When Shiddo does this, it’s #Omellytime.

Shiddo showed hints of his #Omelly mentality early against Guelph. After Western fell behind 10-2 in the first quarter, his demeanor shifted from deferential to aggressive, pushing the ball up the floor and calmly making a mid-range jumper to cut the lead to six.

Minutes later, he drilled a three-pointer to make it 12-7, and attacked the basket for a layup that lingered on the rim but didn’t fall. His teammates took their cue and soon Western had its first lead of the game.

At the end of the first quarter the score was 28-28. At halftime Western led 47-46, and they never looked back.

“I’m not the rah rah type of — football type of leader,” said Shiddo. “I try to lead by example.

“Say what has to be said, and other than that just lead by example. It’s not how much you say, it’s about what you say.”

In U Sports, most teams are at the mercy of a Carleton dynasty that has won 14 of the last 17 national championships.

Western is a long shot to come anywhere near the title game this season, and Carleton is favoured to win it. When the teams meet for a regular-season tilt at Alumni Hall on Jan.  31, it will likely be for the last time.

Shiddo is nobody’s fool. He knows the odds are stacked against his team, even if he’s at his best and #Omellytime is in full effect.

His confidence is tempered with realism, but it’s still there.

“Against a team like that we’re not going to be up by one at half — we’ll probably be down by 20,” he said. “We have to play our perfect game.”