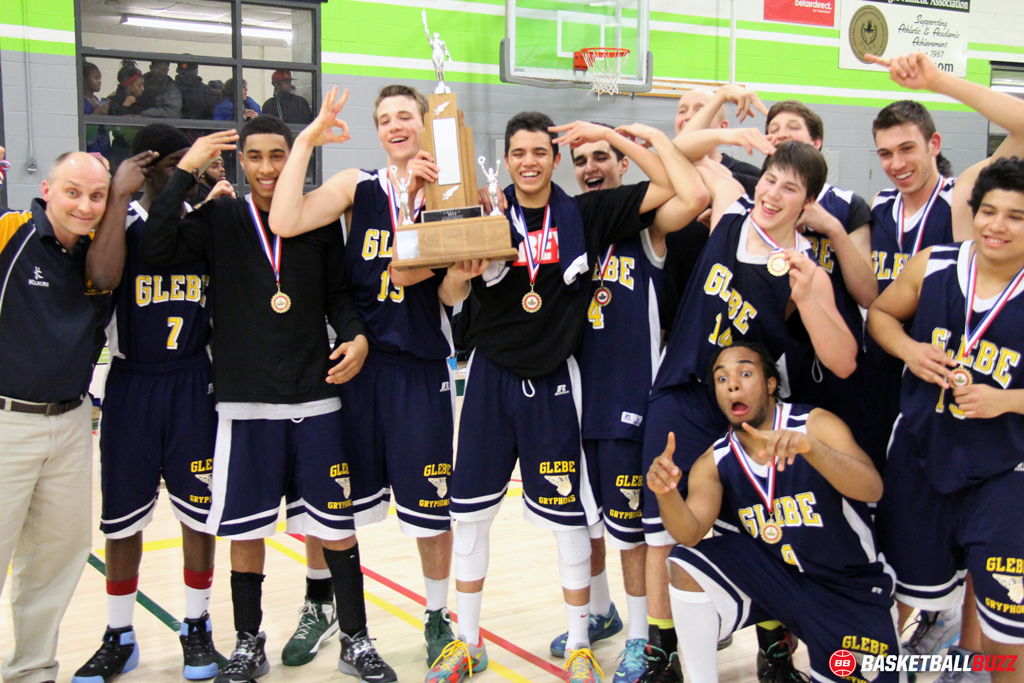 Ottawa, Ont. – (BasketballBuzz) – When it comes to city basketball championships in the Ottawa basketball region the name that resonates the most with basketball pundits is undoubtedly and well deserving the St. Patrick’s Irish.

Located in the corner of Alta Vista and Heron Road, the Catholic school has dominated the high school basketball landscape since the mid 90’s, capturing title after title at both the junior and senior levels while representing the National Capital region at the provincial (state) championships year after year.

Glebe Collegiate Institute Gryphons located in the city’s lower-town has also developed a strong basketball tradition over the last decade and has been one the few schools in the area to be been able to compete with the Irish, but unable to dethrone the Irish.

The Gryphons behind an inspired performance from highly-touted guard Yasiin Joseph finally slayed the Irish in a 57-53 overtime slug-fest to capture the 2014 Ottawa Senior Boys City Championship (AAA/AAAA) and in the process ended St.Patrick’s two-year hold of the city most coveted basketball trophy.

Joseph led a late Glebe’s come back to force overtime and finished with a game-high 17 points before fouling out on technical foul as tempers and emotions flared in front a sold-out standing-room crowd at Algonquin College in the city’s west end. Anthony Flores added 13 points including a key steal in overtime to seal the deal.

The Irish known for their athletic play and tenacious defense took a 18-17 half-time lead as both teams struggled to shot the ball in opening two-quarters, but found their stride in the third-quarter to extend the lead to 33-29 as the crowd anxiously waited the started of the fourth-quarter.

Early turnovers by Glebe allowed the Irish  push further ahead a 40-32 with 2:35 left before Joseph, arguably the top player and best point guard in the city took over bringing the crowd to its feet with sweet crossover and layup to cut the lead to 41-40 and send the game into overtime tied at 44-44.

With players on both teams fatigue and crapping out it was the Gryphons who seemed to have the extra gear in the four minute overtime session by picking beating St. Patrick’ s to loose balls and grab a quick 53-48 advantage with just 2:30 to play and never looking back and shocking the Irish to earn a hard fought 57-53 victory.

“We hung in there, our kids stayed together and we barely made enough foul-shots” expressed longtime Glebe Head Coach Al Overwijk after game.

I’ve been in this game for many years and have come up short plenty of times and it finally feels good to win one, especially with this group” added  Overwijk, who now has the tough task of taking the Gryphons to the 2014 OFSAA 4A provincial championships in Mississauga, Ontario.

“You know, we will probably get a 15th/16th seed and we will just go there and play and fight, we will see what happens.”

For the Irish and head coach Matt Koeslag the opportunity to earn a second three-peat in school history (City champs, 1999, 2000, 2001) slipped away but their season will continue as they advance to the AAA championships in Welland Ontario starting on March 5-8. The Irish came just short of their second AAA provincial championship last year, earning a second-place finish against Windsor’s  Catholic Central.