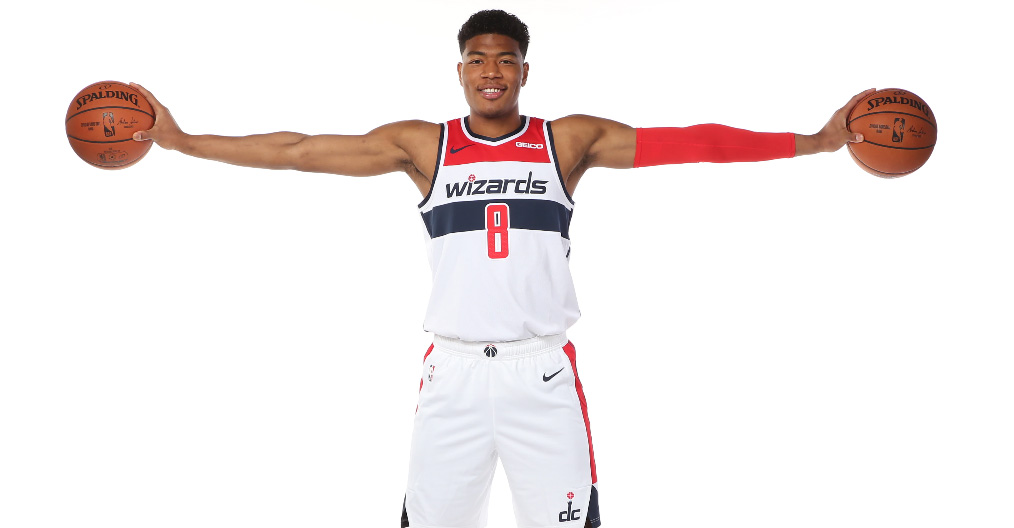 Just How Big In The NBA Can Japan's Rui Hachimura Be?

About 6 foot 10?! No seriously, ahead of this weeks double-header NBA preseason exhibition clash between Canada’s very own reigning champion Toronto Raptors and James Harden and Russell Westbrook’s thunderous reunited Houston Rockets in Tokyo, Japan’s Saitama Super Arena. Let’s take a look at the biggest thing to come out of the home of neon and anime since Godzilla himself roared blue fire.

Gonzaga God and Wizard of Washington with the 9th pick in the 2019 NBA Draft, a year before the 2020 Olympics in Tokyo, number 8, Rui Hachimura.

Hachimura isn’t the first Japanese player to enter the NBA-recently think of Yuta, Tabuse of the rising Suns and Watanabe, the hustling Memphis Grizzlies sophomore who this Summer has proved he can star alongside the front-court Wizard-but he’s for sure the biggest. And by next summer Rui will have fans waiting outside of every stadium in the Tokyo prefecture like Hachi. This is a true underdog story. Japan’s number 23 could be the LeBron or Jordan to the land of the rising sun.

This rising son is currently the cover star of Japan’s premier Dunk Shot magazine that reads backwards like the future and his name in neon bright lights for this big city. D.C. to the one famous for the worlds biggest Starbucks and Harajuku fashion girls that Gwen Stefani sang about, no doubt. And expect him to dunk home a shot for SLAM soon too.

Last night this writer currently living in Tokyo, Japan, trying to forge a career in language and teaching with hopes to make it to next Summer’s Olympics like your favourite Team USA or Canada player was flicking through channels as decipherable as this countries remote controls and came across a Bill Murray ‘Lost In Translation’ like game show that featured a mascot sized caricature costume of Rui playing air hockey (well if he doesn’t make it in hoops (he will)) with a man dressed in nothing but basketballs…that’s when you know you’ve made it.

Forever in this 21 moment, the 6 foot 9 inch, 230 pound heavyweight tweening power and small forward, Julius Erving Award winner from Toyama by the sea showed out in the NBA’s Summer League. Before being even bigger for Japan in this Summer’s FIBA World Championship. Cementing his and his countries place in the host nations Olympic next year with this young flame and his rising sun, red dot land looking to engrave rewrite even more history by the end of this season.

And now he’s in Washington taking more than a fast train to the former Bullet franchise he is the biggest thing-at least in height and Far East stature-about right now. Forming probably the last big three in the dynamic duo superteam era with the best backcourt in the association of John Wall and the real, deal Bradley Beal.

Make that trending legendary face now. Because if you think the WNBA MVP Elena Delle Donne Washington Mystics are the only D.C. side winning this year then you must be playing. This Lincoln tall centre is about to pull something out of his Wizard top hat, bringing change like Obama.

Forget the trumped up President, Washington now have something they can really shout about.

Hachimura’s first name Rui means fortress and he’s about to build one in a Washington land of walls that needs a new monument. So whether H-Town or The 6 come up big in Japan by the end of this week, we know whose name will really belong in the electric billboards of the Times Square like Shibuya come next crossing. It’s the second Japanese born player to be drafted in the NBA since Yasutaka Okayama was selected by the Golden State Warriors way back in 1981 and the first in the first round, let alone the top ten…ever.