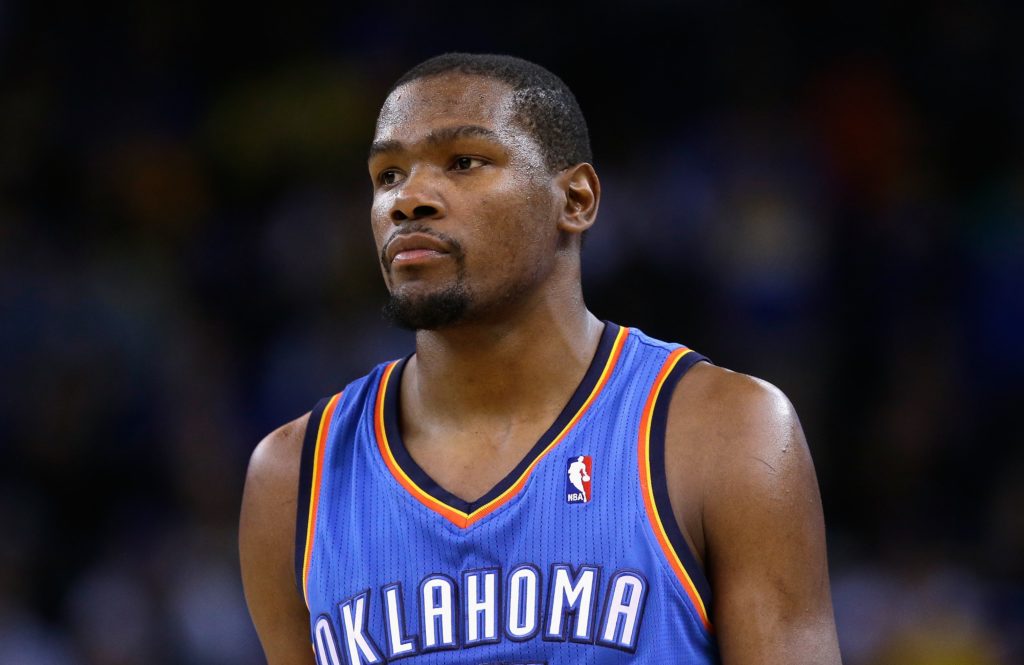 Kevin Durant Feature – The Next One

Kevin Durant is tired of being in second place. MVP’s, championships, the whole, damn thing. Do you hear that LeBron? I know he’s been talking tweet trash with your buddy Wade recently but his assassins eye is on the creed of your Miami jerseys blood red? Do you hear that Kobe? He’s obviously believes he’s that much better. Right now, yes, but we all know how it stacks up in the G.O.A.T rankings. Do you hear that fans? Do you believe in David and Goliath stories and legends? You know the kind where a big, strong force is moved by something much smaller? Where a skinny man, shows what’s buried deeper inside? The ability to develop and stand next to the big boys of the nation a-la Captain America? Sure in the league of the NBA there are two perennial stars of stars to marvel at; Kobe Bryant and LeBron James. Still, however as the debate between who is better rages on, these two corners of the association have had to make room for one more like ‘Bron’s teammates in South Beach in this avenging season.

Over the years not much touches the NBA’s puppets, except the man who’ll be pulling the strings in years time as the next Godfather of the association; Kevin Durant. Kevin Durant is the future. Now, just like rap’s greatest Jay-Z and the late, great Notorious B.I.G. we ‘aint saying Durant’s better then the leagues big, but he’s the closest one. LeBron may be the MVP with a valuable team, weighed in championship gold two times for the scales, but Kevin can outscore the King and he and the Thunder may just be able to get to his throne quicker with his lightening, fast play. Kobe may have the rings and the legend, but Kevin’s next in line for a championship as he lays the path of his own, unique legacy. Durant and his Oklahoma City Thunder caught the Lakers multiple playoffs ago now and Kobe can’t keep up with Durant’s youth much longer. It’s all about to get fine like wine as Vino’s prime keeps pouring away and this storm rider keeps soaring.

They are arguably the best team outside of the new beast east, even with a clicking championship contender in the Spurs of San Antonio. As they age and sage, the west will be Durant’s like his athletic teammate Russell. Just wait until he returns from injury, with franchise partner and one of the strongest points in the league; Russell Westbrook and a great team of players, from former Celtic Perkins to Africa’s Ibaka, Lakers and clutch legend Derek Fisher and a host of names stepping it up to the household. In addition to the silver linings of a playbook of coaches and fans behind him behind him there really is a storm coming, with a forecast of ‘reign’ and we aren’t talking about Seattle’s Storm. This is Oklahoma’s team and time now. Kevin has taken this former Seattle team from the bargain basements of sale to the top of peoples ‘League Pass’ expense accounts at super Sonic speed. Motoring this Oklahoma, ‘Ford Centre’ inhabitants forward with his keys in the ignition. Affecting change like he had shares in Starbucks (they still did the Sonics and the city of Seattle wrong by the way).

Waking up a city that missed it’s one-year rental Hornets like strong coffee, stinging the notion of a one and done year. This amazing ‘Durantula’ has climbed up the leagues web, keeping his smooth as silk team right with him as his spindly arms string together all sorts of powerful, hammer-of-Thor dunks for his Thunder team when he runs the break like a gazelle and no one else in the NBA kingdom. The points, wins and newspaper headlines keep on pouring out for Oklahoma City. Special K is more then a basketball serial killer, or scoring machine. He’s the complete, franchise player and leader like fellow, former scoring champ Allen Iverson before him. Unquestionably this guy is answering the critics and showing fellow top scorers that 30 points per game is the new 20. Once, twice Commodore times a scoring leader and champion. Put that in your box-score as he smokes the opposition.

Durant shares more with Kevin Love then a first name. He’s part of an exciting breed of next generation players who are going to take the worldwide league to more Magic/Bird, Kobe/LeBron popular heights. He’s already proven his global worth, leading the charge in the World Championships, before carrying the flag for Team USA in the golden Olympic Games in London in 2012. The globe is listening to more then just his brand of headphones. We don’t even know this guys ceiling yet, but right now it’s looking as beautiful as the Sistine Chapel. The sum of Kevin’s part add up to something huge. With some Kob’ and ‘Bron in him, and the scoring and competitive killer instinct of Mike, this guy really is an heir apparent. Still, however with the addition of a cool, calm, but fire-inside, Tim Duncan demeanour in him and a body and versatility type of a young Kevin Garnett this guys multiplying talents can he’ll divide double teams and subtract the opposition.

On the whole however-despite the influences-Durant is his own man and a one-of-a-kind player. He is an establishing legend, who is already being the benchmark that younger, drafted players are being compared to and this guys only 24. He could even be so much more. This do it all, all-star guy is the kind of player that on his best day could win the ‘Slam Dunk’, three-point and skills contest at the All-Star weekend. He’s already won the quickly defunct game of ‘H.O.R.S.E.’ showing this top scorer can do more then just outscore everybody, he can shoot from anywhere too. Just check his top ten plays and add some miracle, made to look easy shots to the memory bank off the glass. Still Kevin Durant’s not concerned with February like jilted lovers and broken hearts. He’s already married a WNBA player now he wants the ring. This lone man wants to still be in the heart of NBA partners come late Spring and right now him and his Thunder are in matrimony with the best of the leagues best.

Really all that will be left is the king and his men and although LeBron James really is the best, Durant will have no problem taking his talents to South Beach and seeing what he can leave with. Blood? Sweat? Champagne burnt championship tears? It may take a few more years for this man to show the league that the real heat belongs in Oklahoma, but right now one thing is clear, Kevin Durant is here and his legend is here too. To stay as his legacy continues to the legend of banners and rafter jerseys making their way to the hall of hoops immortality. We are witnessing someone before his time, take the league by storm. The opposition better stay in doors, K.D.’s got more then a foot in, he’s kicking it in like the Notorious one and everyone knows his name. The Thunder’s top man has hit the league with a lightening bolt and he’s about to strike once again. He’s tired of being in second place, so you better keep up pace in this race. If your eyes are shaded by the Miami heat you better look outside…there’s a storm coming.