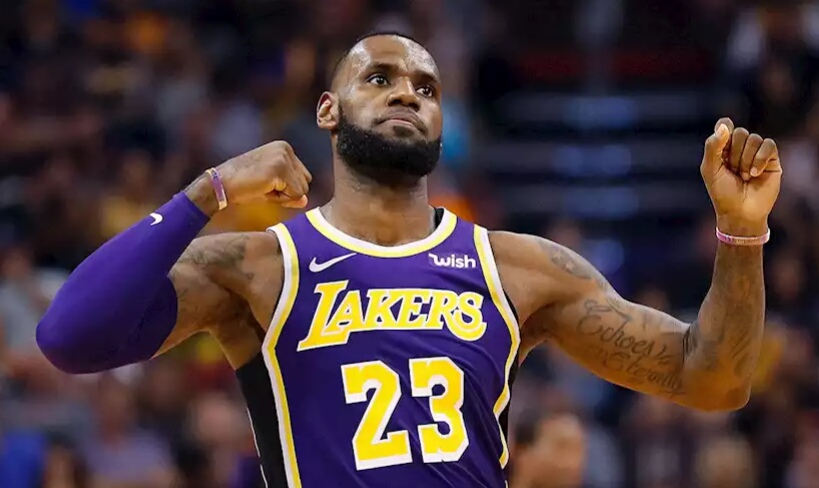 So I guess Kobe Bryant isn’t coming out of retirement after all.

The Laker legend told Jimmy Kimmel in Hollywood this week that he’d “consider” lacing them up again if his former franchise went 0-5 to start the 2018/2019 season, whilst promoting his new book on the late night host’s show. But last night the new LeBron Angeles Lakers dug deep for that Mamba Mentality and blew up the Suns.

The King rose in Phoenix as the Lakers extinguished the Suns 131-113. It would have been a close call for the Lake Show if you swapped those last two digits around. It would have gone to overtime in fact like the last home thriller against former legend Pau Gasol’s Spurs. Which LeBron looked to have in the bag with a huge three which sent the game into O.T. and L.A. Sparks great Candace Parker into exclamations of “Oh.My.Goodness” at her basketball brothers big bomb. But then ‘Bron turned into Shaq at the charity stripe and that was all she wrote. But last night 113 looked to be unlucky for the Suns as the Arizona Phoenix was put back in the ashes of its place.

And it couldn’t have come at a better time for the Lakers who after dropping their opener away in Portland’s City of Roses, lost the next to the Houston Rockets along with Brandon Ingram and Rajon Rondo for a fair few games as they got into it with Laker asterix Chris Paul. They needed this one on the road to book against Devin Booker’s boys. Especially after coming off coming so close to beating their modern Boston rival, the San Antonio Spurs. The Lakers hustle, energy and ball movement was as hot as Venice Beach and its players in July. But the Spurs just had too much DeMar DeRozan. The former Raptor going off like those animals in the kitchen until the California club couldn’t stand the heat like a California sub with too much paprika.

Must Read:
Ryan Kelly Believes He Can Fly As Lakers Win On A Dunk

But this game was different right from the opening tip that the Lakers controlled as they remained on top. Practicing what they preached in preseason as assist machine Lonzo Ball found a spring sprinting JaVale McGee and rewarded him for his won ball with a return alley-oop right off the bat. A play as genius as David Schwimmer’s Twitter response (and everyone else’s) to the appeal from Blackpool police to find a man who stole beers from a convenience store matching the description of looking like Ross from ‘Friends’ (for the record he looked more like Russ). Oh and shout-out to whoever came up with that Lakers ‘Friends’ theme tune Twitter video of the summer. Anyway back to it, the big center once disgraced by the Big Aristotle caught everything else thrown at him like he has been since his punctuated preseason. That is when he isn’t blocking everything in sight. Or hitting every weight room in sight. The only place you’ll find him right now other than above the rim is in the gym. His dedication off the block and through the hoop is the beating heart and soul of this team. The energy of this guy is off the charts. The energy of this team starts with this guy’s hustle. And it flows.

The Lakers cremated the Phoenix. Beating them by the legal drinking age overseas, whilst LeBron James brought everything in the box score a round. The King finished with all the stats to the tune of 19 points, 10 assists, 7 rebounds and 3 swipes as the Suns had nothing left like us when the day that giant star burns out (dark I know…get it?). But it was the guy that blew in his ear with his other jersey, number 6, Lance Stephenson who blew the Suns house down with a mad dog 23 (how fitting) points. Leading the second unit when former Josh Hart in the sweet rhubarb Nike’s wasn’t setting screens and making steals and cases for Defensive Player Of The Year as he ran the floor for transition dunks. Now will someone give the ‘Superbad’ Stephen Glansberg a high-five?! This kid is taking everyone’s lunch money.

Lance’s 8 rebounds and assists even laced Lonzo with a Showtime is back assist off the glass. As Ball showed for the second time this game that he can get up above the rim. And if they didn’t think the Ball boy could get it like that than just you wait until they saw JaVale McGee from downtown Phoenix. Just plays after Suns commentators reacted to a deep two make from the seven footer with doubting comments that Phoenix would leave him open like that all day, JaVale McGee turned into JaVale McThree. With buckets of rain all day in the W dry desert.

McGee had the most points in half a decade with 20 to go along with 6 rebounds and 4 blocks. Whilst against Booker’s 23 and rookie Deandre Ayton’s 22 and double/double with 11 boards (not to mention Laker legend (yeah I said it) Trevor Ariza and vet Tyson Chandler still burning for the Suns. He’s like that work horse in ‘Animal Farm’ that refused to be turned into glue) the Lakers lead by as many as 27. With Hart’s 15, 17 and some big dunks from Kuz and an all round influence like LeBron in Lonzo with 12 points, 7 rebounds and 6 assists. Who needed B.I. and ‘do though? As the new Lake Show made a statement in their Nike Statement jersey debut. The perfect purple with the black strip as these Lakers became road warriors for their first win under the King. Fading Phoenix’s bruised purple that for the Lakers once looked blue to black.

And that was that.

Now back-to-back let’s see what they can mine against the Nuggets in Denver tonight.