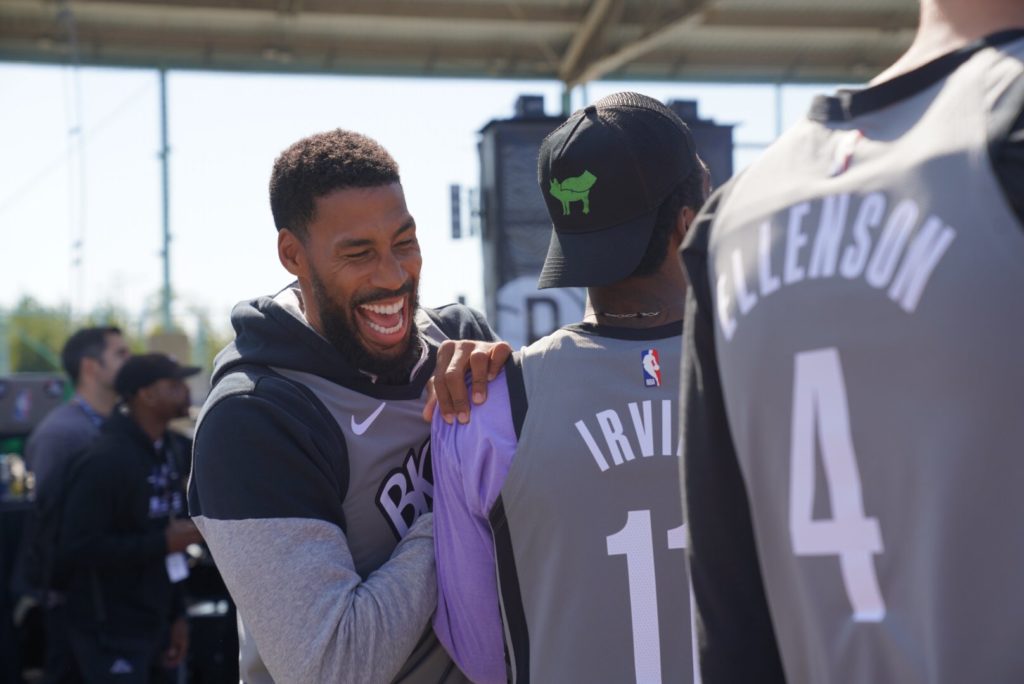 The all new, All Star look, Kevin Durant and Kyrie Irving Brooklyn Nets debuted their brand new, graffiti on grey Nike NBA jerseys yesterday in the heart of the B.K. On the perfect late Summer sunny afternoon for their annual Practice In The Park event.

And forget a blacktop. On this concrete playground with a grey-scale to match their new, innovative court design this season doing away with the parquet, the new Kings of New York spread love the Brooklyn way, doing it B.I.G.

Now how juicy is that?

Whilst Durant’s former Dubbed team the Golden State Warriors came out cold in their San Francisco arena warming and California clash against LeBron James’ new Anthony Davis led Lakers (and how about a 20 and 10 in one half for the next Hollywood big man great in Laker legacy?), Kevin had his hood up in the sun to all that with his own new dynamic duo with former Celtic Irving. Kevin and Kyrie and the rest of the DeAndre Jordan, Spencer Dinwiddie, Jarrett Allen and Joe Harris B.K. Net gains were cooking in their new heat like someone had the barbeque coals going for some burgers and hot dogs on this any given Sunday.

With the New York skyline of the Empire State that they are about to dominate (sorry Knicks, but you are really on to something too) like Chrysler or Freedom in the background, stepping out on one of the cleanest courts you’ve seen outside in the same Rucker lead town of iron rims, grazed knees and broken ankles, N.Y.C’s team made their new duds official in front of some of the best fans in the world…let alone city.

Now how’s that for a Statement, for a team who from ABA to Coogi sweater trim has had some of the best alternative takes in the association?

We just can’t wait for their classic drips…even though all of these are already. How about a sky blue shine to honour where they NBA came from in the Meadowlands of New Jersey for the late, great Dražen Petrović?

Now that would be love spread like grey across the parquet.

And I’m not sleeping until I see something go intergalactic with the Beastie Boys for Adam.

But this big fit of the day is tagged by the classic “BKLYN” graffiti spray.  It’s not the first, or second time this abbreviation has donned the Nets duds and in grey too, but never quite like this.

Graffiti is as important, influential and as integral to the Brooklyn borough street scene as brownstone or Biggie. Notorious to it. Can’t you see? These jerseys are about to hypnotize you and me.

But don’t kick in the door just yet. It may be the Summer, but like Christopher Wallace that doesn’t mean we’re taking off the Coogi sweaters just yet as we count the Benjamins it’s all about. Like the herringbone lining here, they are going to be given one more chance this season, but this time in Net nylon white. Now how about that?

But now it’s time for the Durant and Irving BKLYN Nets to make their mark on court.