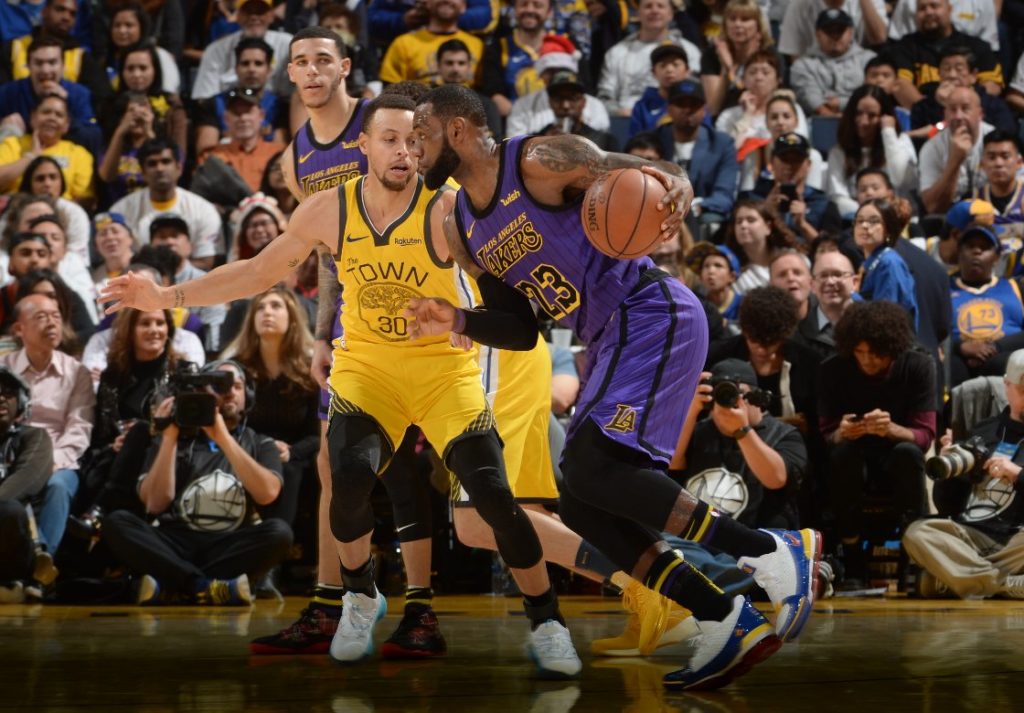 On Christmas Day, Lakers Deck The Warriors With Balls Of Hollywood

Chestnuts weren’t the only thing roasting on an open fire this yuletide season. As in the heat of a California Christmas clash, the Lakers had a Merry one and they weren’t even home for the holidays.

Taking their Hollywood show on the road. After Kyrie went “this is 40”, two former Thunderous MVP’s went at each other in Houston and the Knicks, were…well the Knicks, LeBron James and all the King’s men went to the Oracle and turned it into a snow globe.

The Lakers have been like a Warriors bogey team of sorts for a few calendars now. Especially around this time of year. Ever since their young core of Ball, Kuzma, Ingram and more represented the next generation of Curry, Thompson and Durant death line-up splash (they also had the perfect Draymond Green match in Julius Randle…the one player they really shouldn’t have let go (but alas we will digress like we never did about the CP3 veto)). But this December with the captain Hart of the Lakers decked out in Grinch green Nike’s, these kids looked ready for the Hall as they stole Christmas like Dr. Seuss.

Now how’s that for a bedtime story?!

127-101 isn’t just a W it’s a WW..W.T.f.com. As the Lakers shook the pine out of the Warriors, needling them for a 26 point by the fireplace blowout on the 25th. And they did it for the most part without number 23 in the end. As after just 21 minutes, but still an all-time 17 points, 13 rebounds and 5 assists, King James left the game with a groin injury. He wouldn’t return and the Lake Show sorely hope we will do by New Year. Look at our last article…I hope we didn’t jinx him.

But even without his crown leading the way like the Queen’s speech from the throne, the young Lakers still knocked the dynasty Warriors off theirs…in their own castle too. As the Lakers wore ‘City Edition’, Lore Series, purple pinstripe in The Bay, they showed true Magic as the Warriors decked out in Laker gold couldn’t find any in their state in Oakland.

Iguodala had 23 and Durant 21. But you better suspended that “preordained” parade across that bridge to a new home in San Fransisco, with everyone talking about this could be the first time the King doesn’t see the Finals…or playoffs in eight years we could be looking at a new born California king. Sure we promised ourselves we wouldn’t get carried away but this is the Lakers earliest 20th win of the season in almost a decade. They didn’t even get there in 2015. The last time being when LeBron wasn’t in the Finals. It all looks too much like a sign. Leaving the Lakers nation as excited as they are to hear the eyebrow raising Anthony Davis say, “I’d take legacy over money”.

The rest of the Lake Show know it’s time too. Brandon, Ball and Kuz just being Kuz with a team high 19. Or the vets. Rajon Rondo truly back from injury had a commentator described perfectly, “masterful” performance. Dishing and driving like the post Christmas dinner routine. Alleying to Zubac who once again went HAM like 2Pac in this California love, with a double dominance of 18 and 11. Blocking and dunking everything in sight like he was the down and out Tyson Chandler and JaVale McGee, who really wanted to make the trip to face off in the paint against his old team but was still recovering from his bout of pneumonia (Get Well Soon McG, from the gym to the floor no one has gone as hard as you this season). And speaking of players out, prayers to Michael Beasley who lost his dear mama over this season, but at least got to show her him play live in his home state of Washington against the Wizards this fall. We’re thinking of you and everyone else mourning a loss this Christmas.

Even Lance Stephenson was clutching at downtown daggers. Rocking around the Christmas tree with a guitar. Taunting the Warriors like he was blowing in all their ears. And all that huff and puff brought the house down. As the Lakers left with more than a W, or the respect they earned last year…but an advantage that wasn’t even on their home-court.

So as you put up your “socks again” present on your coffee table. Wearing your ugly sweater and wondering whether to take ‘Elf’ off the shelf again or keep with real festive tradition and watch the NBA Christmas Day games, the Lakers reached under the tree and pulled out a cracker.

And for the New Year it looks like good tidings they bring, to the Lakers and their King.

From everyone from Basketball Buzz to you and yours, we wish you a Merry Christmas.