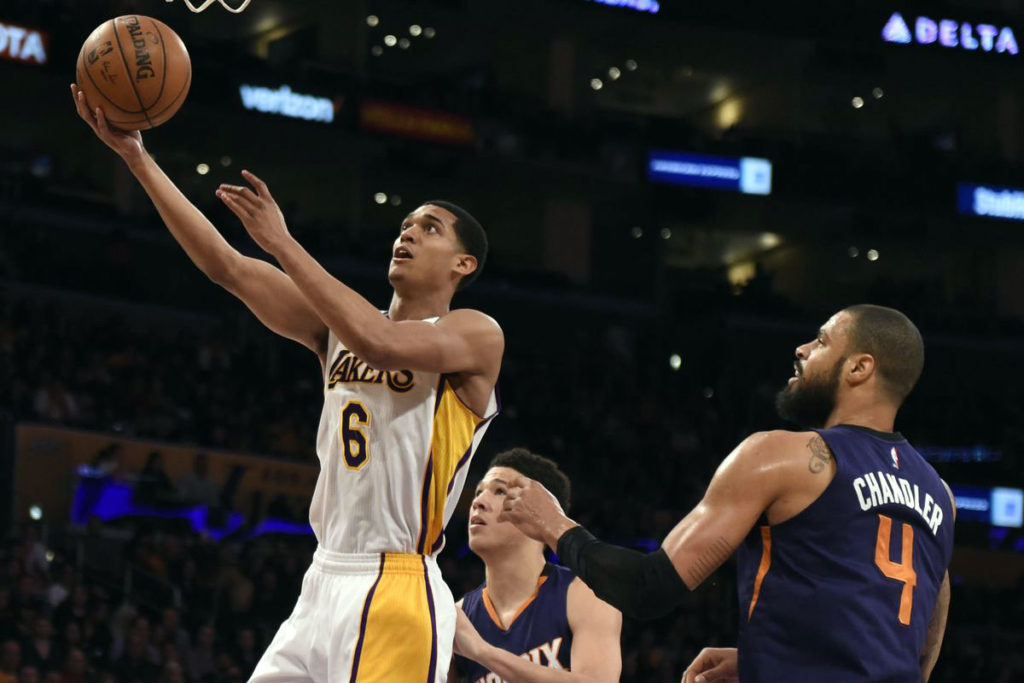 Glimpses of the Showtime show of the future in Los Angeles was on dunking display and hand last night, as the young Lakers gave their city a Hollywood, script rewrite ending without their leading man.

Retiring Kobe Bryant was out again, resting a sore shoulder. But so was Suns’ star Eric Bledsoe who the Lakers have wanted in the past for their future. Even so the youthful revolt of the Lakers coming seasons still scorched the Suns, burning them above the rim from the outset and drying them out with a 97-77 blowout, 20 point rout.

BasketballBuzz, currently in California and waiting on the Warriors and Charlotte (and hopefully Curry), like Oklahoma City won’t hit town until their match-up with STAPLES (and hopefully Kobe) on Friday. But Thunder was already striking the baskets last night, raining and reigning in Southern California.

And we are not just talking about reigning Sixth Man of the Year Louis Williams game-high 30 points, to go along with 7 rebounds, 4 assists and a nice halftime buzzer beater. Even leading Sun Brandon Knight’s 25 couldn’t keep up. Meanwhile there was plenty of reasons for Lou Williams and young guard, sophomore and rookie duo Jordan Clarkson (12, 7 and 5) and D’Angelo Russell (7 and 4 off the bench) to dish those gorgeous gifts of delightful dimes.

In their Sunday whites on this Hollywood weekend night the purple and gold’s clean sweep, wiped out the Suns above the rim, doing more than just cleaning glass. And it wasn’t just former Phoenix Suns, Slam Dunk Contest champ Larry Nance’s son who was elevating like he does now by tradition every game. The rookie steal junior, who last night beat sophomore future Julius Randle in their power struggle for the starting forward position had 15 points, 14 rebounds and two dunks of the nights if it wasn’t for the contesting of his teammates like it was mid-February in Toronto.

Even Roy Hibbert (13 points) was putting it down as his fake, drive and slam was inspired, bringing the pace back to the former Georgetown, Ewing, Mourning and Mutombo, big-man following Hoya. Seeming everyone was catching iron…except Sun Tyson Chandler who kept clanging it. In one sweet story of redemption these raw Lakers were the ones rising like Phoenix’s at L.A’s sunset.

Must Read:
Is It Time For The Lakers To Make A Move On Another Anthony?

Especially Jordan, who like Mike put a dunk down so strong and sinister it must have been the shoes…or something else entirely. Since Kobe’s been gone, Clarkson and his new Lake Show have been undefeated in the New Year of 2016. Not con-Vinced? Then you need to look no further than the pointing kids face in the crowd behind the basket to know that Clarkson got it like Carter. Or an off the bench and on the floor Nick Young who needed to be resuscitated with mime heart paddles after all that swag.

Now the Lakers future in Lob City is really looking to take off like LAX.